The storms of human history: Introducing the Crisis Databank

In recent weeks, mass protests have gripped North America, Europe and elsewhere, all taking place against the backdrop of a global pandemic, a changing climate and a possible sixth mass extinction.[1] Meanwhile, the Seshat team is working on something that may at first seem rather tangential—escapist, even. We’re building a historical database. Delving into the annals of numismatic societies, scouring publications on osteoarchaeology, and gathering historical datasets compiled by other research teams. But this exercise is actually more timely than it may appear—we are working now to bring together the information we need to study how political crises and state breakdowns have played out in 300 historical case studies from the Egyptian Old Kingdom to the twentieth-century United States.

The processes that have led to our current predicament—the behaviour of pathogens, cycles of interlinked political instability and socioeconomic inequality, long-term anthropogenic climate change set in motion centuries, perhaps even millennia, ago—unfold according to their own internal timescales. Right now we are in the midst of a “perfect storm,” and it won’t be clearing up any time soon. We’re in for a long monsoon rather than a spot of rotten weather.

The “perfect storm” image has also been applied by archaeologist Eric H. Cline[2] to the collapse of many Bronze Age civilizations of the Eastern Mediterranean around 1200 BCE. In a recent interview available on YouTube,[3] Cline poses an interesting question: did these societies know they were collapsing? Or is it only with the benefit of hindsight that we can describe what happened as a series of state breakdowns? Although the clay tablets, papyri and manuscripts of the past are rich sources of evidence for how people have coped with crisis, they have to be approached with caution. From Pharaonic Egypt we have a whole genre of writing that bewails the state of society during the periods between strong centralized kingdoms that we now know as “intermediate periods.” The Admonitions of Ipuwer is one example, written from the perspective of a man alive after the end of the Old Kingdom. The rich have become poor, and the poor rich, laments Ipuwer. The royal storehouses are plundered, violent gangs roam the land, and fathers and sons have become enemies.[4] 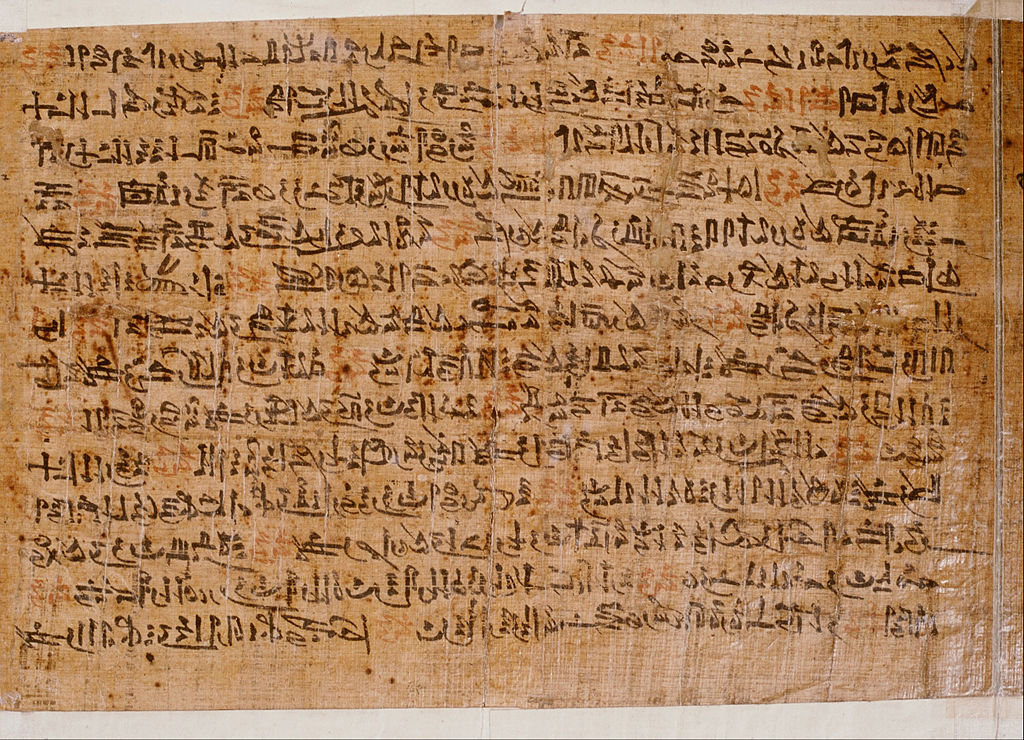 The Ipuwer Papyrus, a papyrus dating to c. 1250 BCE including a copy of the Admonitions of Ipuwer. Now in the Dutch National Museum of Antiquities, Leiden. Source: Wikimedia Commons.

But things are not so simple. Many scholars view Ipuwer as a fictional speaker and his complaints as a kind of literary device, in fact set down under the powerful rulers of the Middle Kingdom. Like other examples of what the German Egyptologist Jan Assmann[5] has called Chaosbeschreibungen (accounts of chaos), the text may have served as a loyalist defence for the centralized state. Similarly doom-laden descriptions of a world turned upside down come from ancient Mesopotamia and the Levant.[6] Their implied message often comes down to the same thing: watch out! You might think you have it bad now, but the only thing keeping you from gnashing your teeth and rending your garments in the streets is the king and his officials.

So exaggerating the famines, pestilence, and disorder of the past had its political uses, and texts can be misleading. Archaeologists, proceeding from the material evidence, have been known to deny that paradigmatic cases like Egypt’s Intermediate Periods, the fall of the Western Roman Empire or the collapse of Classic Maya civilization were as complete or as dramatic as is commonly thought (Guy D. Middleton’s 2017 book Understanding Collapse[7] is a prominent example) That’s why we need multiple sources of evidence, exploring how various aspects of human cultures and their ever-changing environments interact and influence one another. Building on Seshat founding director Peter Turchin’s work applying structural-demographic theory to historical societies, we’re hunting down data on demographics and elite numbers, coin hoards, skeletal evidence of violence, state expansion and contraction, epidemics, famines and other variables in order to create nuanced, dynamic pictures of our 300 case studies.

It’s already beyond doubt, from our data and from the work of many archaeologists and historians, that collapses and crises are never clear-cut. Turmoil only sometimes leads to drastic population decline, and rarely brings about the complete destruction of cultural knowledge and institutions. As Middleton and others[8] have pointed out, narratives of collapse are precisely that—narratives. Apocalyptic visions like those of Mad Max, Children of Men or Cormac MacCarthy’s The Road perhaps tell us more about our own fears than about our real-life prospects. To shamelessly quote another blockbuster, the idea that “life, uh, finds a way” may be closer to the mark, based on what we know about the past.

Of course, our societies in 2020 are far removed from, say, the Hittite Empire in 1200 BCE or the Mongol Empire in 1300 CE. For one thing, we’re vastly more interconnected, both economically and culturally (the SARS-CoV-2 virus has brought that home in the bluntest way possible), and our collective impact on the earth’s biophysical systems is much greater. Whether our greater interconnectedness (and our reliance on technology) will be a strength or a weakness in navigating this situation remains to be seen. But our hope for the Crisis Databank is that a systematic look at historical crises can reveal unsuspected patterns—and maybe even suggest possibilities for responding to the situation we find ourselves in today.

[5] Assmann, J. 1983. “Königsdogma und Heilserwartung: Politische und kultische Chaosbeschreibungen in ägyptischen Texten.” In Apocalypticism in the Mediterranean World and the Near East: Proceedings of the International Colloqium on Apocalypticism, Uppsala, August 12–17, edited by D. Hellholm, 345–77. Tübingen: J. C. B. Mohr.

[8] For example, Severin Fowles, an archaeologist of the American Southwest: “Perhaps it is true, as many now argue, that the spectral image of collapse has crouched in the shadow of every civilization…”. Fowles, Severin. 2015. “Writing Collapse.” In Social Theory in Archaeology: The Present and Future of Counternarratives, edited by Geoff Emberling, 205–30. Ann Arbor, MI: University of Michigan Press.