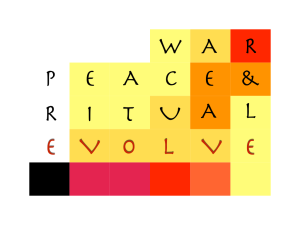 The Deep Roots of the Modern World: Investigating the Cultural Evolution of Economic Growth and Political Stability

There is no question that today there is a staggering degree of variation in economic performance and effectiveness of governance among nations. Understanding the causes of these disparities is one of the greatest intellectual puzzles in the social sciences, and one of the most pressing problems for economic policy.

This research project seeks to test various hypotheses about long-term historical causes of economic growth and political stability through the exploration of factors that may have been integral to these processes in different societies throughout history, stretching all the way back to the Neolithic period in some areas (ca. 4th millennium BCE).

The Seshat Global History Databank allows us to directly test rival theories that invoke historical institutions, technological development, and ecological/geographical factors as explanations of long-term economic growth and political stability.
Our investigation into long-term dynamics of economic performance focuses on the following areas:

Seshat: Global History Databank is a partner of the international ALIGNED consortium, which has been recently funded by Horizon 2020, the massive EU program for research and innovation.

Through the ALIGNED grant, Seshat will be able to tackle three issues common to large-scale social sciences or humanities database projects in innovative ways, answering questions such as these:

How do we structure and control the uploading of data by very large numbers of users?
How can we speed up data collection?
How can we be sure of the data quality?

ALIGNED will help to tackle these issues by developing a sophisticated software platform that will underpin the Seshat database. This platform will be based on the RDF standard, and Seshat data will be stored in a Triplestore databank; it will be scalable and suited to deal with very large user numbers and user types; and it will structure the data-gathering process and will keep track of how every single data point is entered, augmented, approved, or challenged.

ALIGNED will also speed up the data-gathering process considerably by building state-of-the-art web crawlers, integrated within the Seshat workspace, that will go over large digital text corpora. The use of these crawlers will allow Seshat contributors to quickly identify precise information in a very large body of text.

Levels of inequality have changed dramatically during the course of human evolution: from the social hierarchies of our hominin ancestors to egalitarian small-scale societies of hunter-gatherers, and then to large-scale hierarchical societies with great inequities in the distribution of power, status, and wealth. The Axial Age (c.800–200 BCE) introduced another notable transformation in the evolution of inequality, starting a move towards greater egalitarianism that has been continuing to the present.

The roots of these recent developments can be traced back to the evolution of new forms of spirituality associated with the rise of world religions during the Axial Age, such as Zoroastrianism, Judaism, Buddhism, Hinduism, Confucianism and, later, Christianity and Islam. The overall trend during the post-Axial period was a strengthening of the moral foundations of complex societies.

The questions we seek to address in this project are:

What caused these two trend reversals in the evolution of human inequality?
What steps did societies take to overcome the tensions between the benefits of hierarchy and the desire for fair treatment by the majority of the population?
What were the cultural mechanisms involved in the first and second reversals?

We will code data on religion, norms and institutions, and other cultural characteristics of historical societies in a form that will be suitable for statistical analyses so that different theories can be tested in a rigorous manner. The project was funded by the John Templeton Foundation from June 2014 to February 2017.