The increasing availability of open access georeferenced datasets is creating exciting opportunities for researchers in a variety of fields. Here, we discuss how several Open Access datasets have been combined in order to reconstruct the types of vegetation found in the environs of three key Neolithic sites located in the Konya Plain, Turkey. This region is a pivotal landscape in the Neolithic of the Near East and was selected as one of the Seshat Project’s initial World Sample 30. The Konya Plain is predominantly known to archaeologists as the home of the World Heritage site of Çatalhöyük, a vast settlement occupied for several thousand years and subject to intensive excavations by James Mellaart in the 1960s and Ian Hodder from the 1990s to the present day. However, Çatalhöyük is not the only significant Early Holocene site in the region. Indeed, we can trace an apparently local transition from hunter-gathering to crop management through the three sites of Pinarbaşı, Boncuklu, and Çatalhöyük (Figure 1). At the Epipalaeolithic site of Pinarbaşı, the archaeological evidence points to a hunter-gatherer way of life for the inhabitants of the site, subsisting on wild resources. In contrast, at the nearby site of Boncuklu the occupants’ diet seems to be comprised of largely wild resources, supplemented with some wild crop progenitors and domesticated resources. Finally, at Çatalhöyük, we see evidence for a developed system of crop management, with extensive field systems and crop management practices. 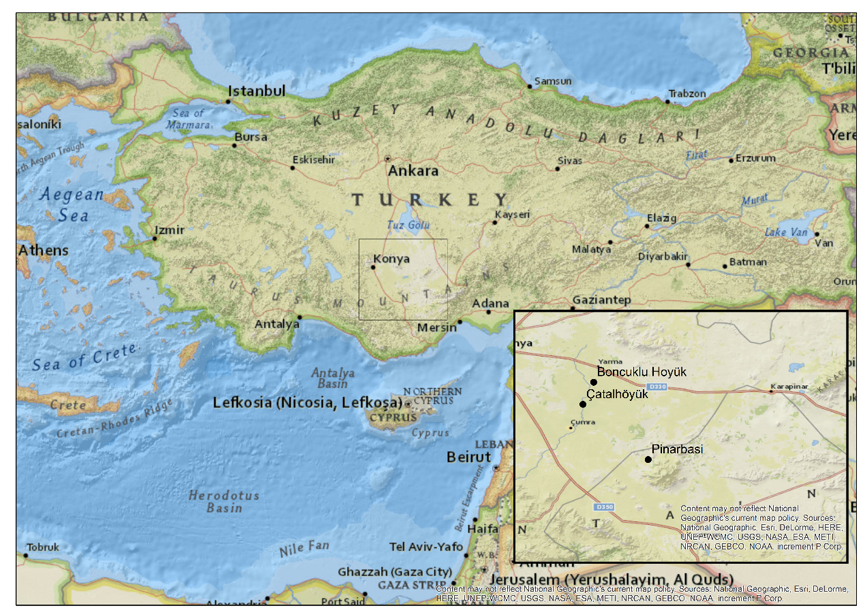 Location of Key archaeological sites in the Konya Plain, Turkey

We utilized several completely open access and geographically-referenced datasets to reconstruct the environment of the Konya Plain in the Early Holocene. In order to understand the modern distribution of significant plant species, we looked at the modern geographic distribution of these species through datasets submitted to the Global Biodiversity Information Facility. We overlaid these locality layers onto modern climatic datasets obtained from worldclim and elevation data obtained from the Shuttle Radar Topography Mission (SRTM). In this way we were able to obtain an idea of the modern day climatic tolerances of key plant food species such as Amygdalus orientalis (almond trees), Pistacia atlantica (pistachio trees), and both wild and domesticated forms of cereals.  We combined this information about the tolerance range of species, with the existing palaeoclimate record for Central Anatolia, to predict the ancient distributions of these species and predict whether they would have been common in the environs of Boncuklu, Pinarbaşı and Çatalhöyük in the Neolithic.

Comparison of the ‘expected’ (modelled) distribution of these plant species with the ‘actual’ (observed/archaeological) distribution of these species revealed some surprising results. Both einkorn and barley are predicted to be abundant in the Early Holocene of the Konya Plain, yet are virtually absent from archaeobotanical assemblages from both Pinarbaşı and Boncuklu. It appears that the early inhabitants of the Konya Plain chose not to exploit crop progenitor species, despite their apparent abundance on the plain. While the ecological abundance of food resources may have been a significant factor in the adoption of agriculture elsewhere in the Near East, it seems that cultural preferences also played a role in the Neolithic of the Konya Plain.

The research illustrates the potential of large open source datasets for reconstructing ancient landscapes and answering questions about the origins of food production. As the availability of linked-open data increases through the efforts of projects such as Pelagios and the Seshat Project, we can expect to see more research combining geographic datasets to reconstruct ancient landscapes and environments.