In building Seshat, we’ve had to find a way to make the periods of history useable data. Like all  other Seshat data, our periodization can be revised by experts at any time. But separating history into periods is not an obvious thing (unless the population is completely replaced by another group).

How did the ancients do it?

When time was measured by the stars, kings stressed continuity. Periods of time could be periodized by natural disasters, such as the Great Flood on the Sumerian King list that covered 241,200 years, but the rulers of the first civilizations mainly stressed a single golden chain of authority that dated back to time immemorial – to the gods or a classic ‘founding’ age. 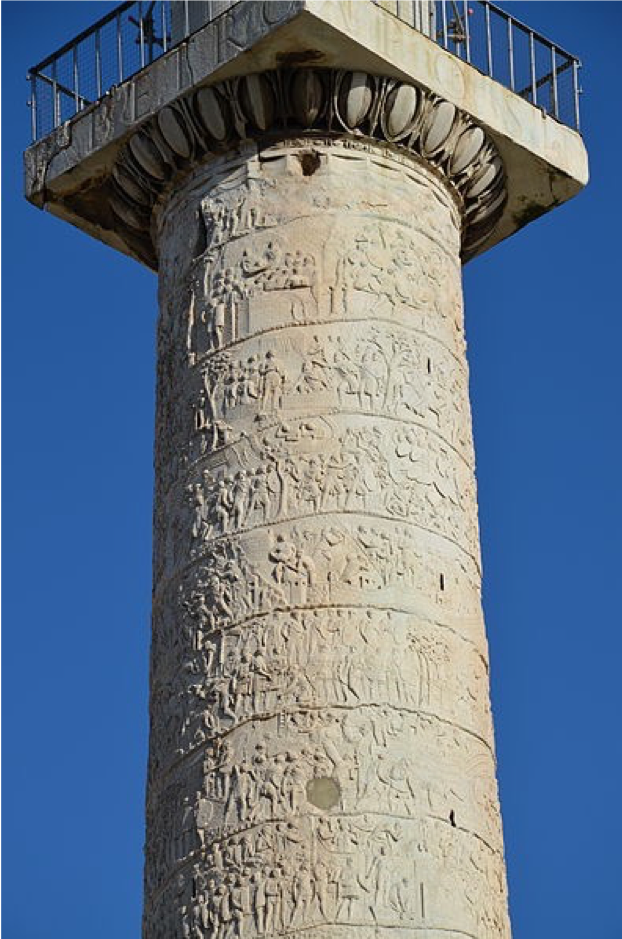 The distinction of time as separate events and happenings blossomed during the Axial Age period. Keen to legitimize their rule through heroism, kings illustrated events, such as victorious battles, in prominent places on rock reliefs and columns, like Trajan’s column. Moreover, the writings of Confucius and Herodotus, and others, made it apparent that the ruler of the day should know and have learned the lessons of history.

Seshat periodization is different because it’s not designed to encourage trust in a ruler but trust in a science of history. We have sought to chain our polities together not to a golden dynastic legacy or wars alone but using an objective, empirical method, that covers a range of markers that can be applied to any time and place in history and the future.

How did we do this?

First we needed to accept that a single method of periodization was not possible for every time and polity in every NGA region. One fundamental difference is between archaeological cultures that can last thousands of years, and polities (kingdoms, states, empires) which mostly last much shorter spans of time (75-250 years). We made a decision not to code any state longer than 250 years because longer timespans make coding, and reviewing, changes more difficult. Also, polities rarely last longer than this in natural time span.  By contrast,  ‘polities’ that are primarily based on data for archaeological cultures can go on for much longer stretches of time.

A second fact that results from the first decision is that a Seshat polity will not always be equivalent to a whole ‘polity’ as conventionally understood, it may be a period within one. For example, the ‘Roman Empire’ after 31 BC is split into four periods: Principate (-31-284); Dominate (285-394); Western Roman (395-457); Late Antiquity (458-489). The Parthian and Sassanid Empires are coded with two periods, and the Byzantine Empire (632-1204) has three and the Ottoman Empire five.

Our default approach (Rule #1) is to start the periodization at the ‘rise’ (when the polity acquires territory and there is economic and population growth and administrative development) and end at the ‘fall’ (at the end of a period of loss of territory, disorder, warfare or decentralization and before the next ‘rise’).  Polities that approximate the complete ‘rise and fall’ pattern include the Mali Empire (Keita Dynasty), the Akkadian Empire and the Seleucid and Seljuk Empires.

If the ‘rise and fall’ approach does not work, our next recourse is to find a natural ‘break’ point, such as at the end of the rise (Rule #2). We then code the second less-organized period separately (e.g. this is how we have periodized the Parthian Empire since after 40 CE the polity is of a notably decentralized character).

If this periodization is not possible we might (Rule #3) look for moments of significant religious, economic or administrative change to begin a new period. Only occasionally, such as the break between the Early and Middle Roman Republics does a fairly arbitrary start and end date have to be ‘imposed’ to break up a long period (Rule #4) – in this example, the start of the Punic Wars.

Within these four rules of periodization we use the dates that are closet to those that traditional historians recognise as being important dates. Polities are usually already divided up into many dates by existing scholarship both formally (e.g. represented by a book title) and informally (e.g. often reflected in chapter headings).

This is not a simple process. For example, the table below shows how we periodized the Latium NGA.

It can get complicated. Seshat also has a special form of periodization called a ‘quasipolity’ which code times when periodization is messy, such as when multiple polities encroach into the sample zone (e.g. Sengoku or Warring States period Japan 1467-1568 or the Kingdoms of Tabal 900-730 in Turkey), many successive polities repeat in a short time period (e.g. Five Dynasties period China or Tulunid-Abbasid-Ikhshidid Egypt), or when the polity is known only archaeologically and/or is not centralized enough to be coded as a state.

The intention with a quasipolity is to get a representative code for our variables by drawing data from across different polities rather than a specific culture or polity for which we have limited or no data.

This periodization methodology is a foundational tool by which we now organize over 200,000 Seshat data points. Our datasets can be viewed and downloaded here.