Reconstructing the Past: the “Prince of the Lilies” and the “Minoan Peace”

Over the previous weekend the Seshat project ran a workshop on Cretan history and archaeology. We met in the Villa Ariadne, which the first excavator of Knossos, Sir Arthur Evans, built for himself right next to the great Minoan Palace at Knossos. Several times during the workshop the discussion among the experts and Seshat people delved into a very difficult subject: how do we use archaeological data to make inferences about past societies? In this post I thought I would explore this issue a bit, using two examples from Sir Arthur’s work.

The first one is the famous Prince of the Lilies fresco, which was supposedly found by Sir Arthur in Knossos: 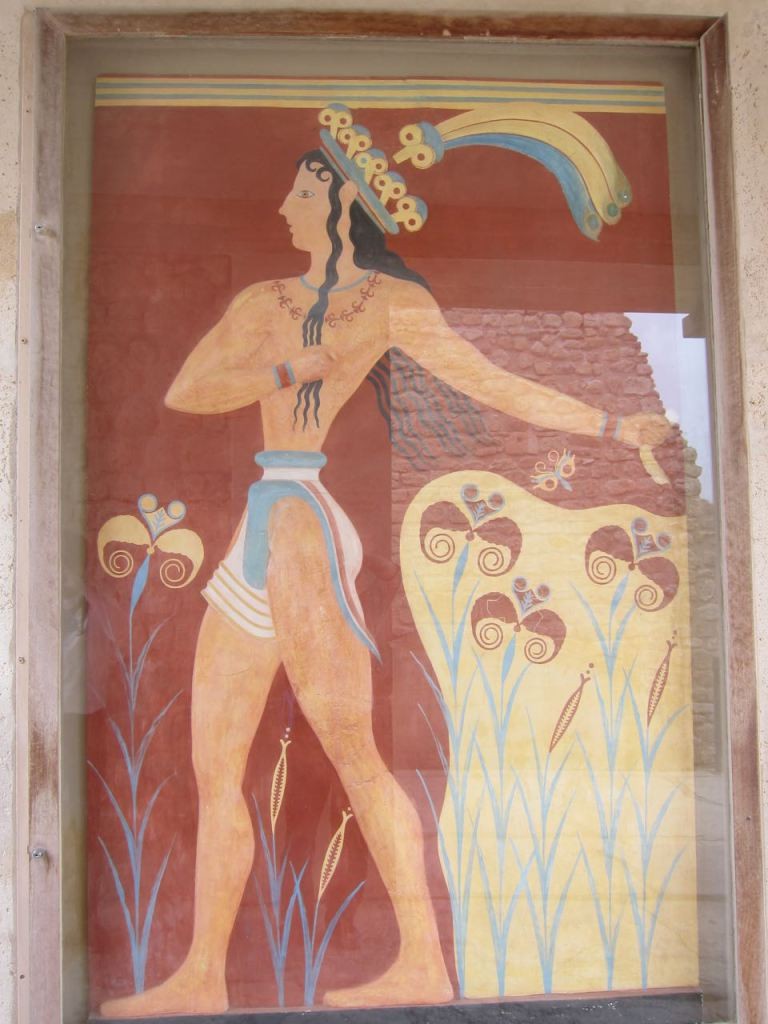 In fact, this famous fresco is, essentially, a 100% fabrication. In the Heraklion Archaeological Museum one can see how it was arrived at: 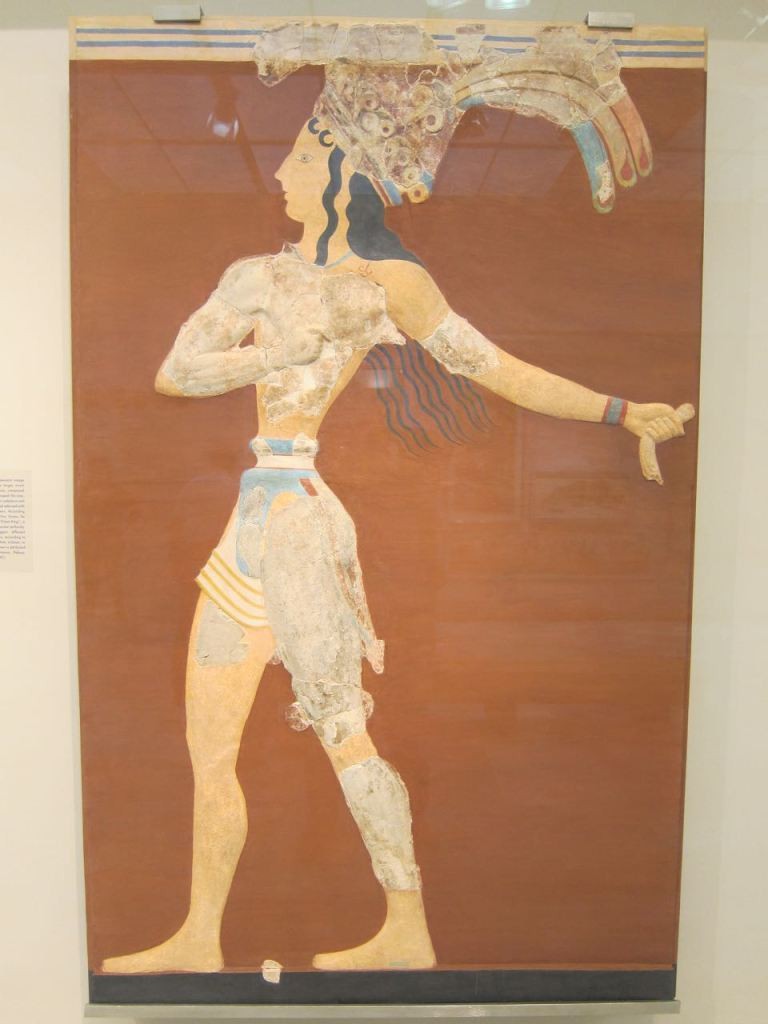 The “Prince of Lilies” at the Heraklion Archaeological Museum

It’s actually a pastiche that includes three elements from what were probably three separate frescoes: a headdress, a torso, and a leg. All the connecting parts were drawn by Evans. Here is the close up of the headdress bit: 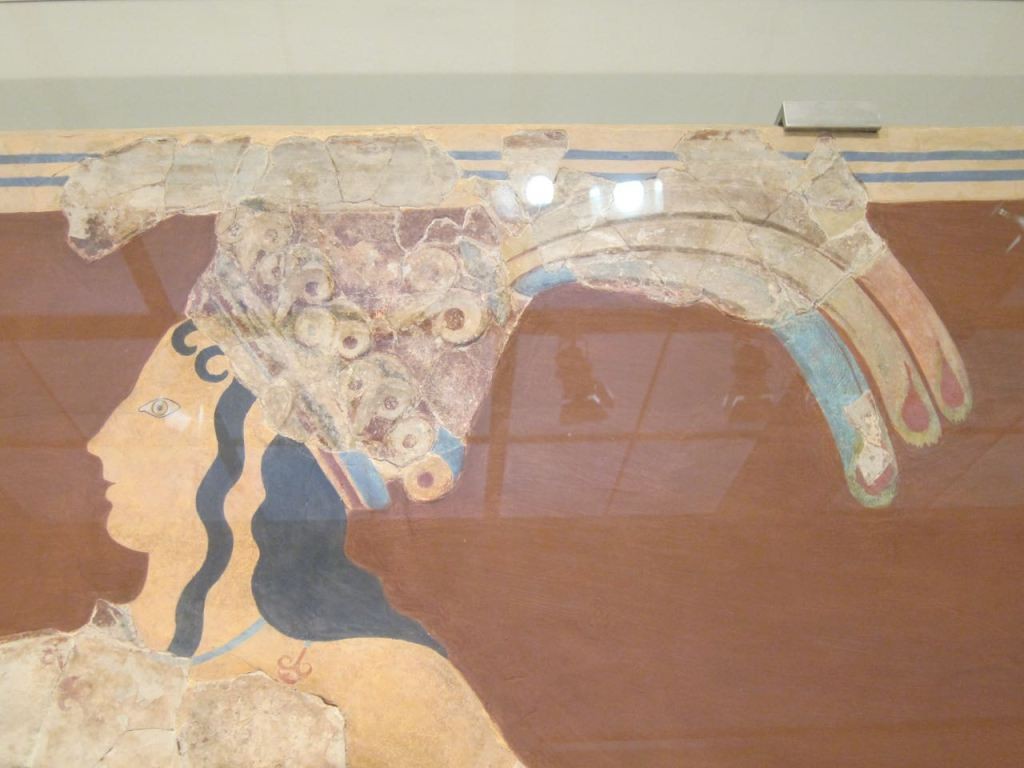 The face is the twentieth century drawing, and Sir Evans didn’t get it right, because, as one of the archaeologists noted during our tour of Knossos, Minoan men didn’t wear their hair in this style. The headdress might not even come from a human, but from a mythical creature like a sphynx.

Now, although the Prince of the Lilies is a complete fabrication, it’s a relatively harmless one. And even, on balance, it may do some good. Surely, this fanciful image has increased the enjoyment of the site for the 99 percent of visitors to Knossos, who don’t know anything about the Minoans, nor care too much about them.

The second reconstruction is more consequential: the “Minoan Peace” (Pax Minoica). Sir Arthur assumed that there was little, if any, war on Crete during the Minoan period. Apparently, even though this idea was challenged subsequently, the majority of archaeologists continue to accept it in one or another form.

But one can accept the Minoan Peace only by ignoring copious and varied evidence pointing to the opposite conclusion.

First, the so-called Minoan “palaces”, which should properly be called fortresses, were located on the tops of hills. Living on a hill top is really inconvenient (if you have no modern transport), because you have a long way to travel to your fields and you have to climb up a steep slope after a hard day’s work. Usually, people prefer not to expend so much effort, unless there is a compelling reason to do so. This compelling reason is security.

The defensive advantages of these hilltop locations were especially apparent on our visit to one of the other great Minoan centers at Phaistos, which, unlike Knossos, is not surrounded by a town. 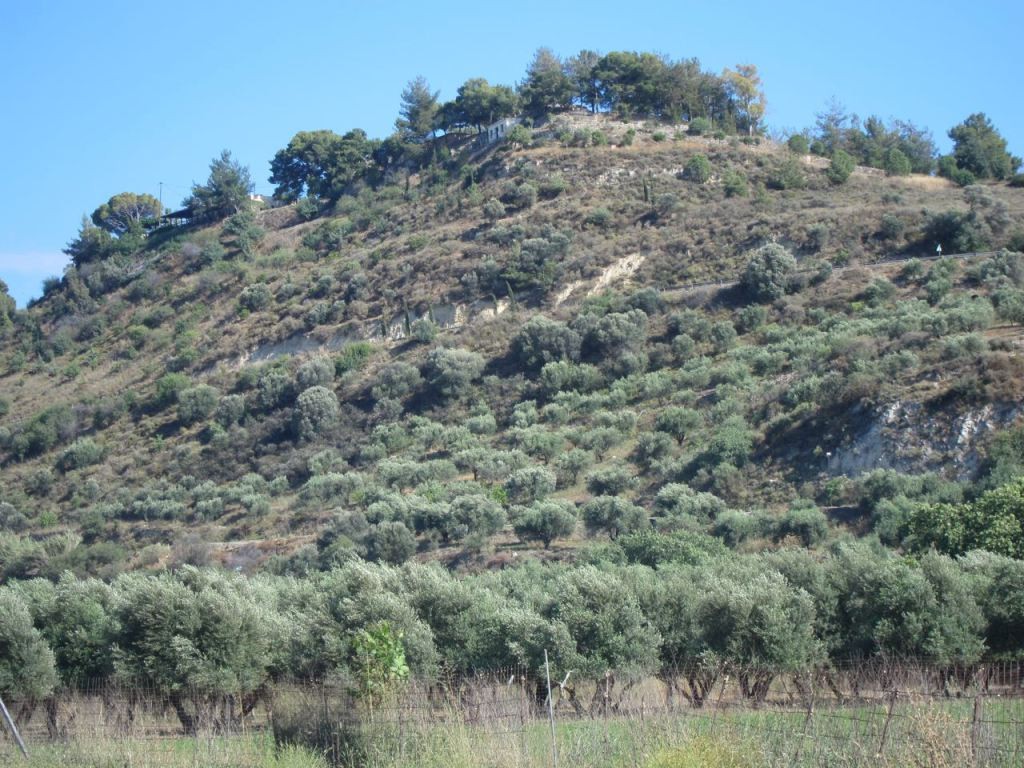 The hill of Phaistos. The palace ruins are just behind the summit. 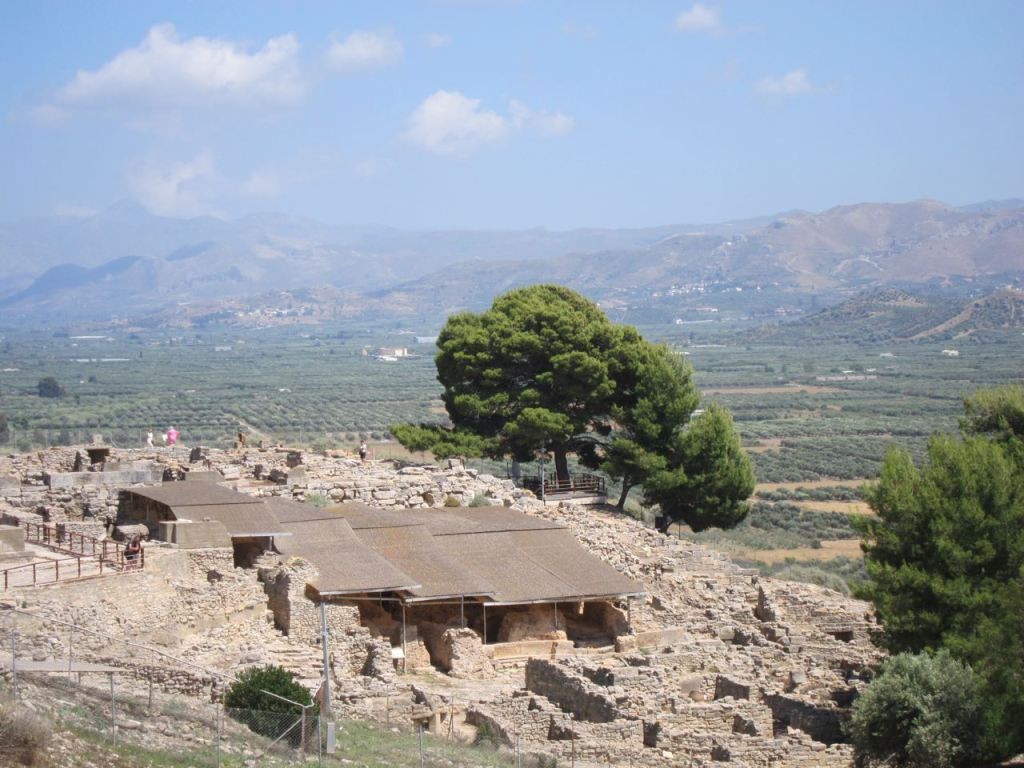 The archaeological site of Phaistos. The hill-top palace dominated the agricultural fields surrounding the hill on which it was built.

The archaeological site of Phaistos. The hill-top palace dominated the agricultural fields surrounding the hill on which it was built.

There is a very strong macrohistorical pattern: people enjoying a secure environment tend to build villages and towns in the lowlands. When threatened, they move them to the hilltops (if there are hills, otherwise they move to river islands, into the marshes, or build walls, stockades, and dig ditches and moats). This is the pattern we see from Peru to Italy. After the Roman Empire fell, and the Pax Romana with it, Italians moved up to the hilltop villages, like San Gimignano, that we enjoy visiting so much today.

On Crete, we see the same pattern: the Minoan palace of Gortyn was built on a hill, but when Gortyn became the capital of Crete during Roman times, the town was moved down to the plain.

Second, we know that Minoan towns were periodically destroyed and burned down. You can still see the evidence of this today: 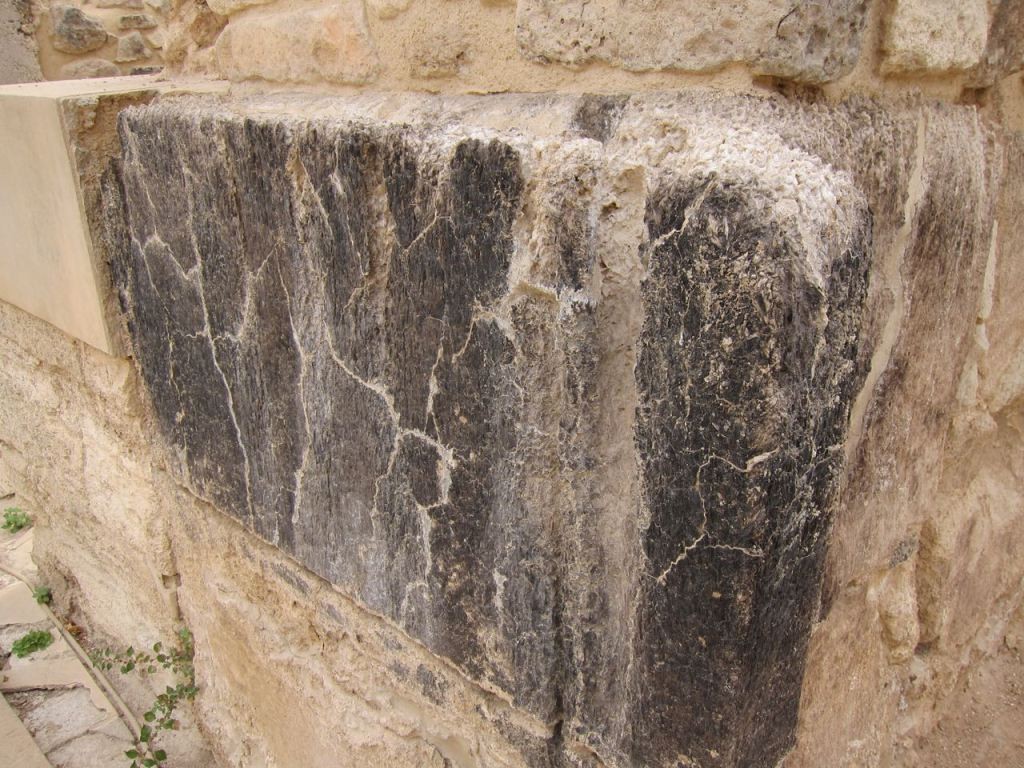 The black coloration of this limestone slab in Knossos is soot, resulting from a fire that destroyed the palace. Minoan palaces were all destroyed at least twice, in 1700 BCE and again 1450 BCE.

Third, there are hundreds of weapons, like swords and rapiers, exhibited in the Heraklion Archaeological Museum, which is clearly only a small fraction of those excavated, and those are a small fraction of the weapons used during the Bronze Age. A rapier is only good for one thing: stabbing people. 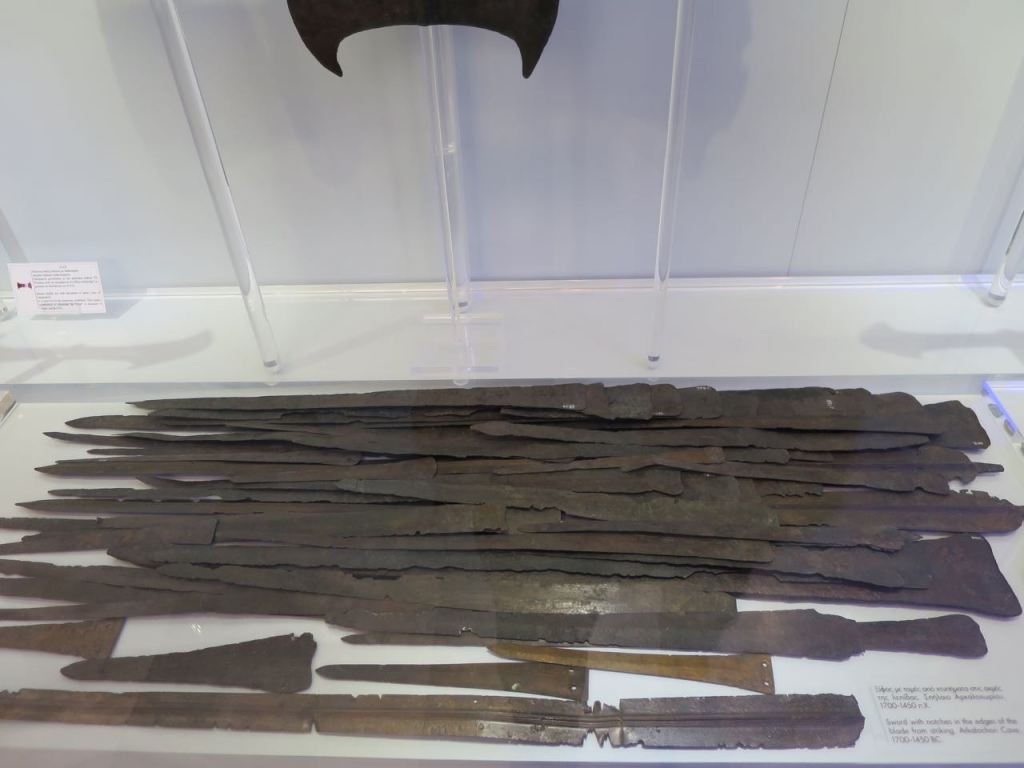 Other signs of unsettled times include hoards, like this one: 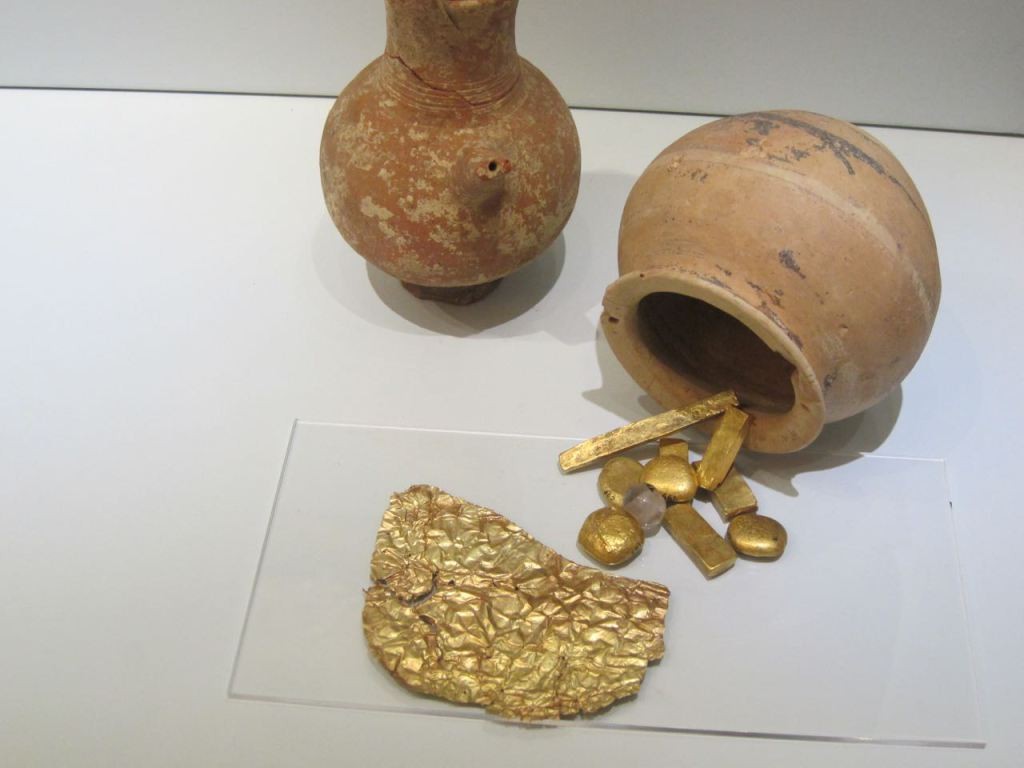 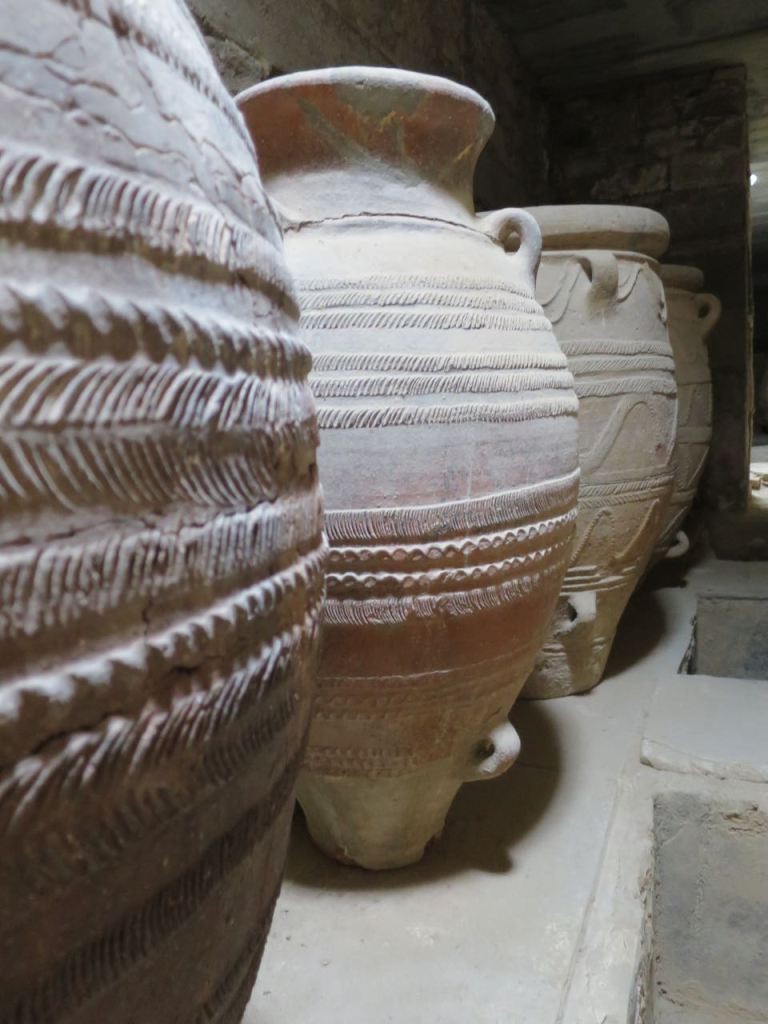 Traditionally, these storage facilities were interpreted as signs of a redistributive palatial economy. But why would you establish a storage depot on a hill top? Furthermore, a quick calculation shows that this storage couldn’t be used to address the needs of the general population.

There were roughly 400 jars each with 5 hektoliters of volume. That’s 2,000 hektoliters. Assuming they stored grain, oil, and wine, that’s not even enough for 1,000 annual rations (a person needs 2-3 hektoliters of just grain to survive). That’s not enough to feed the town of Knossos, which covered 70 ha and had an estimated population of 20,000 – 30,000.

This food (if food it was, we don’t know for certain) could have been used for feasts. However, historical analogies suggest that food stored in fortresses was usually meant as emergency supply in case of siege. This is just a suggestion, but such a use would fit well with other evidence of warfare from the area.

Although I have been beating up on Sir Arthur in this post, I actually sympathize with his position. He clearly loved the Minoan culture and wanted to think the best of it. And I also want human cultures to be peaceful. But we cannot get to the point where we will understand how to abolish wars by ignoring evidence of past warfare.

This is just as sadly misguided as Evans’ own fantasies of a Minoan “king.” Here we go again. “…the so-called Minoan ‘palaces,’ which should properly be called fortresses….” They were/are neither. They were ceremonial and distribution centers. If fortresses, then Minoans made about the worst possible site-selections (easy to see if you’ve been thereabouts). Goodness, they had weapons—why not just assume they slaughtered each other all the time? Wow, they had major storage—elite hoarding, of course! How ridiculous to take very Late signs of stress as definitive of 2000+ successful years. I am SO glad I left Hackademe!

It is utterly ignorant to label the Minoan palaces as fortresses.

Their palaces were laid out in a labyrinth-like plan. This prevents defenders from quickly concentrating their forces where needed and would hamper internal communications (which would need to be as fast as possible in order to respond to threats).

In addition, the multiple open entrances makes it impossible to defend the palaces from attack.

It would have been easier to build a wall around the palaces if they were really fortresses, but there were few fortifications built on the palaces.

So lets discuss actual facts. The palaces were primarily commercial, religious and civic centers. They had extensive storerooms and workshops for craftsmen. They had large courtyards for entertainment, religious events and social gatherings. There were also theaters, but very few fortifications and in most cases none at all.

It is no surprise that their palaces were built on prominent hills. Crete is a mountainous island! During the Minoan period the palaces were built on low hills that were still accessible to the many workers and worshipers that regularly visited. They built porticoes and air shafts to take advantage of the breeze afforded by the hills.

During the Mycenaean occupation some palaces were built on steeper elevations, but they still didn’t fortify them the way they did on the Greek mainland. The Minoans were not a militarily aggressive people. However, I’m sure some twisted propaganda could make them superficially seem like it and could be used to justify aggression against them.

The destruction referred to in this article was due to earthquakes (at least in the Minoan period). Many raging fires were caused when the earthquakes destroyed the pithoi (clay containers), which were full of oil. Torches that were used for lighting completed the equation.

If you want human cultures to be peaceful try using rational arguments based on facts that are used in proper context and don’t ignore the evidence of a relatively peaceful people. Sorry if they don’t meet your standards, but the Minoans were peaceful compared to their contemporaries. They just don’t compare to imaginary peace fairies that have never existed.

You won’t find any ancient civilization that is half as enlightened as they were.

Piecing Together the Palace

[…] A famous example of this is the fresco called the “Prince of the Lilies”, which actually seems to have been incorrectly constructed from fragments to fit with Evans’ imagination of what the Minoan Civilisation might have been like. You can read more about the controversy of the Prince of the Lilies mural here. […]