The Inka making an entrance into the Plaza de Armas and interacting with the crowd.

After the Seshat team cleaned ritual data in May, I was eager to see how our coding approach could apply to contemporary rituals. On 24th June, I travelled to the former capital of the Tawantinsuyu empire—Cusco, the Navel of the Universe—to attend the annual Inti Raymi festival. It is modelled after a famous Inka ritual vividly depicted by the Chronicler Bartolomé de Segovia, who witnessed the last great Inti Raymi in 1535 (D’Altroy 2014, 262). Inti Raymi, also known as the Warriors’ Cultivation ritual, took place annually in the month that coincided with the winter solstice and was one of the most impressive Inka rituals (D’Altroy 2014, 262). Later, Garcilaso de la Vega also described the ritual based on oral stories he heard from his Inka relatives. His major work, the Royal Commentaries of the Incas, is the main source of inspiration for the modern iteration. 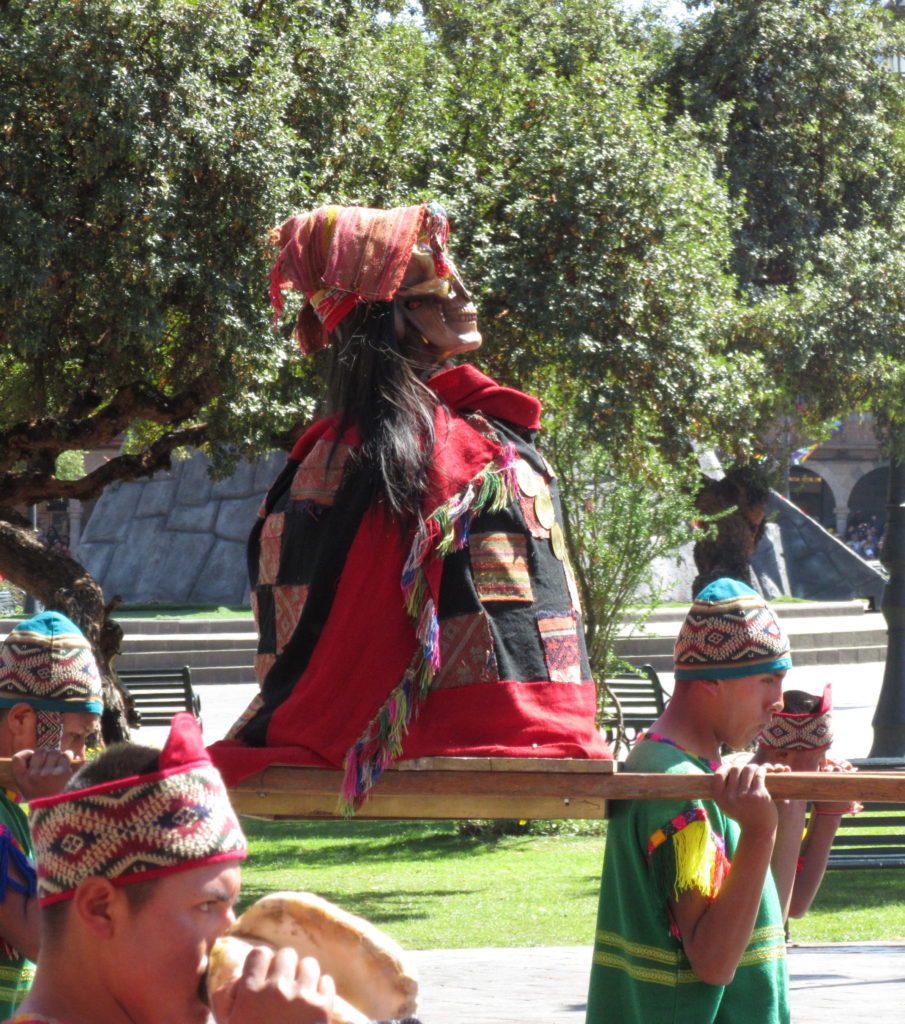 Modern procession of a mummy effigy. The modern Inti Raymi festival takes many of its visual cues from Guaman Poma’s work.

Since the 1940s, the ritual has indeed been revived by the local authorities of Cusco in an attempt to support the national indigenism movement in its local expression and has been imbued conferred with even more political meaning in the 1980s under Mayor Estrada as he added a new component to the ritual whereby the Inka hands his power to the Mayor of Cusco (Silverman 2013).

The staged ritual has become very popular with tourists to the Cusco area and is the culmination of a month of local celebrations in the former capital. Although this ritual is anything but ‘authentic’ (a discussion of what authenticity is would require another blog post), and has been criticised by several scholars for its participation in the disneyfication of heritage, it’s a good occasion to explore the way rituals have been coded in the Seshat: Global Databank project using a concrete, modern example and comparing it to its Inka equivalent. Below is a description of the Inti Raymi following the format of the Seshat Codebook, with information filled in for all of the variables we gather concerning rituals.

♠ Name ♣ Inti Raymi ♥ The re-enactment of this Inka ritual takes place in three stages: the opening prayer ceremony at the Qorikancha (Temple of the Sun), the offering of coca leaves to the mountains of Cusco and the ‘encounter of the times’ between the Inka emperor and the Mayor of modern Cusco in the Plaza de Armas, and the traditional afternoon performance at Sacsayhuaman (Silverman 2013).
♠ Frequency for the ritual specialist ♣ yearly ♥ Every year on the 24th June.
♠ Frequency per participant ♣ yearly ♥ Every year on the 24th June.
♠ Frequency for the audience ♣ yearly ♥ Every year on the 24th June.
♠ Duration ♣ 8 ♥ hours. Although concerts and cultural manifestations are organised for the whole month leading up to the festival, the ritual itself takes place over the course of a day. It starts at approximately 9am from the Qorikancha (Temple of the Sun) and finishes around 5pm at Saqsayhuaman. The original Inti Raymi lasted 8-9 days, according to Segovia (D’Altroy 2014, 262).
♠ Typical size of participating group ♣ [5,000-50,000] ♥ Tens of thousands. The whole Plaza de Armas was filled with people interested in seeing the performance. Although the tickets to attend the Saqsayhuaman part of the ritual were restricted to 3766 people, many more could see the event from the hills surrounding the complex. The first Inti Raymi in 1944 was attended by over 5,000 spectators (Silverman 2013, 131).
♠ Inclusiveness (ritual specialist) ♣ entertainers ♥ Only trained dancers, actors and performers can enact the Inti Raymi festival. The cast of performers involved in the festival comprises thousands of people (Silverman 2013, 140).
♠ Inclusiveness (participants) ♣ whole polity ♥ The ‘polity’ here is no longer the Inka Empire, but modern Peru. This code indicates the widest sphere of inclusion within the Seshat coding procedure, but in this example it would also include people from outside the polity, such as international tourists.
♠ Inclusiveness (audience) ♣ whole polity ♥ Since this is a public ritual, in which the audience actively cheers for the performers (especially the Inka and Qolla, or queen), they are considered participants.

Dysphoric elements
The modern ritual doesn’t include negative, emotionally arousing elements, which makes sense considering that it is an event attracting thousands of tourists.
♠ fasting ♣ absent ♥ It was present for the preparation of several ritual in Inka times (Covey, personal communication) and might have existed for the Inti Raymi as well.
♠ vigil/sleep deprivation ♣ absent ♥ This element would also have been present in the Inka Inti Raymi, due to the continuous dancing and drinking over several days.
♠ fear ♣ absent ♥
♠ humiliation ♣ absent ♥
♠ disgust ♣ absent ♥
♠ poisoning/dysphoria-causing drugs ♣ absent ♥ The original Inti Raymi is likely to have involved alcohol abuse.
♠ pain ♣ absent ♥
♠ mutilation ♣ absent ♥
♠ risk of death ♣ absent ♥
♠ other ♣ absent ♥

Euphoric elements
♠ feasting ♣ absent ♥ The original Inti Raymi, like most Inka celebrations, probably involved large-scale feasting and drinking.
♠ alcohol ♣ absent ♥ The consumption of Chicha (maize beer) was probably key to the original Inti Raymi.
♠ euphoria-inducing drugs (other than alcohol) ♣ inferred absent ♥ During the morning ceremony, coca leaves are offered to the sacred mountains of Cusco; but they are not consumed by the participants. However, this would be a significant departure from the original Inti Raymi, where coca leaves were probably consumed in considerable quantities.
♠ sex ♣ absent ♥
♠ dancing ♣ present ♥
♠ synchronous movement ♣ present ♥ 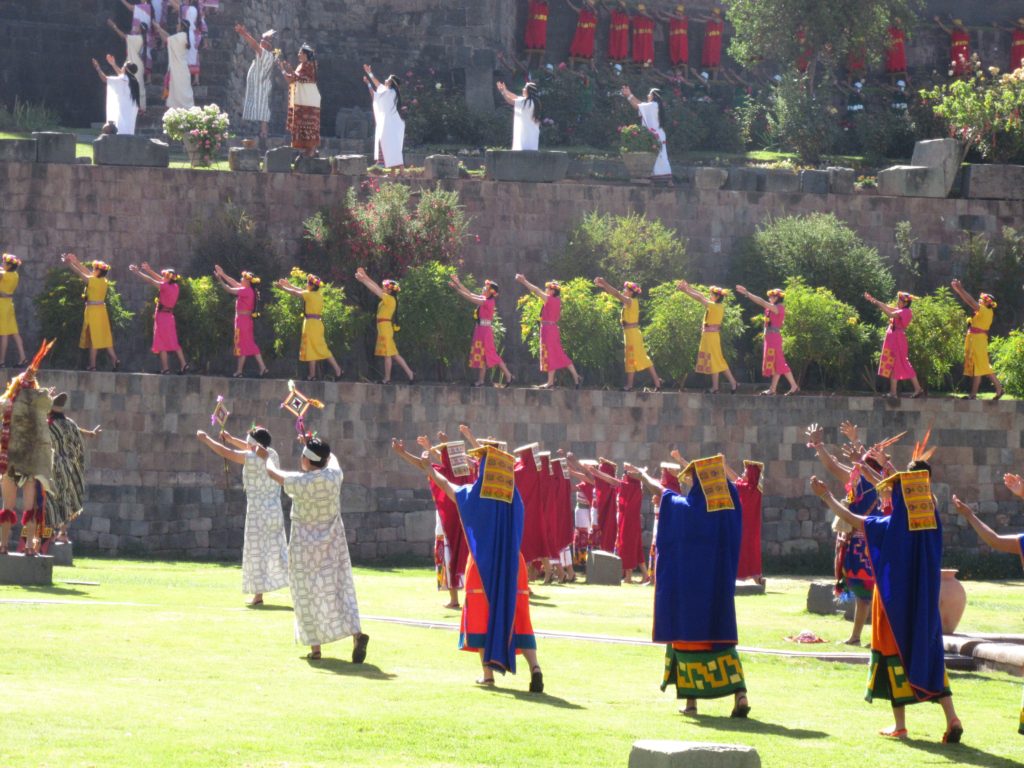 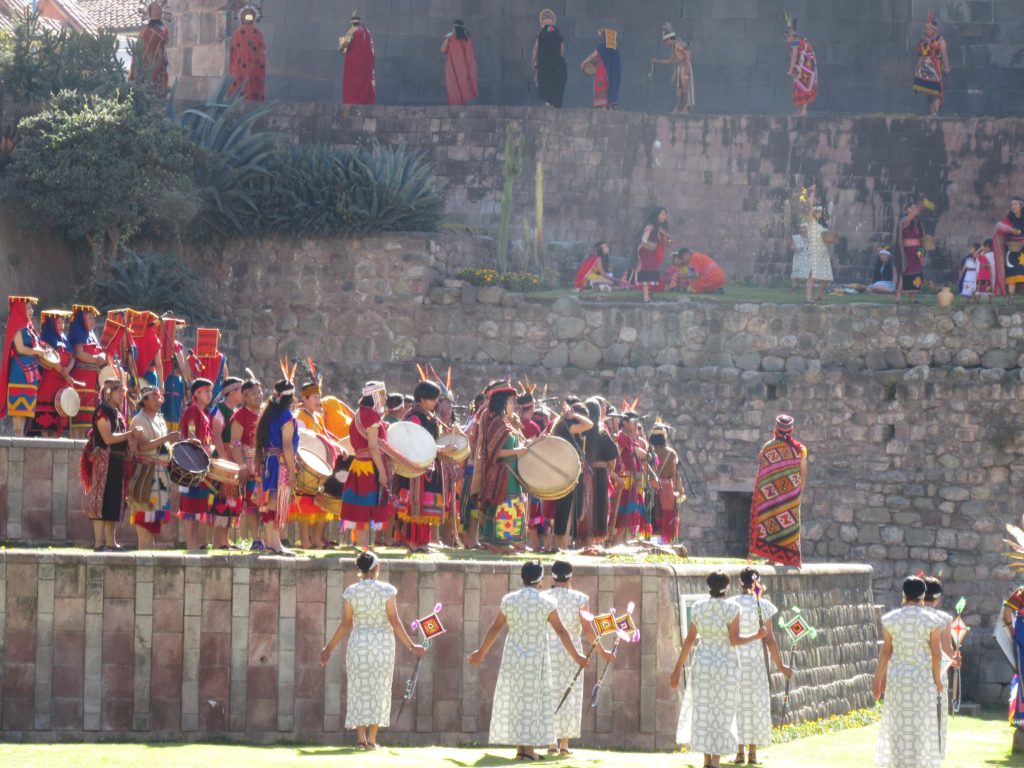 Music: drums and flutes accompanied by singing during the Opening Prayer Ceremony at the Qorikancha (Temple of the Sun)

Cohesion
Although most a significant part of the ritual takes place in Quechua, the former lingua franca of the Inka Empire which subsists as a linguistic family in the Andes, the call for social cohesion through patriotism is easily observable. Before the Inka arrived at the Plaza de Armas, the Mayor of Cusco explicitly linked the ritual to the enduring strength of the nation (in Spanish). Since Mayor Estreda’s modification of the official Inti Raymi script, a whole section of the ritual is devoted to the Inka handing down his power to the current Mayor, who promises to take care of the people and work to improve the city (Silverman 2013, 138). This year, the political agenda was reinforced by the presence of the then president-elect, Pedro Pablo Kuczynski. He has since then been formally sworn in as president on the 28th July. This His presence can be considered a powerful statement, after his fragile victory over Keiko Fujimori a few weeks earlier. During his campaign, the president-to-be Kuczynski consistently reinforced his personal connection to Cusco and the Peruvian provinces, and he owes his victory to the southern electors.
♠ honour code ♣ present ♥
♠ oath taking ♣ present ♥ The exchange between the Mayor and the Inka relies on an honour code and involves a special oath (for the script, see Silverman 2013, 137-138). The verbal exchange had a specific meaning this year due to the presence of the president-elect, hence extending the traditional link between the Inka and the municipality to the whole state of Peru.
♠ enemies of any group member are my enemies ♣ inferred absent ♥
♠ willingness to die for each other ♣ inferred absent ♥
♠ obligations to each other’s families ♣ inferred absent ♥
♠ other ♣ ♥
♠ Orthopraxy checks ♣ present ♥ Orthopraxy refers to mechanisms ensuring that rituals are performed in a standardized way. The ritual follows an official script since 1952, which has been modified by Mayor Estrada in the late 1980s (Silverman 2013, 135).
♠ Orthodoxy checks ♣ present ♥ Conversely, these checks refer to the correct interpretation of a ritual by its audience. Part of the new script generated by Estrada ensured that the political link between the Inka empire as an “imagined community” and modern-day Cusco would become visible to the audience.

This staged event is a key phenomenon for local tourism, on top of being a meaningful political performance. The 2016 iteration could be seen as an attempt to fake social cohesion, a mere two weeks after the presidential elections which highlighted just how divided the country really is. It projects a united façade, at least externally, to the thousands of tourists who come to the South American capital of archaeology. Its orchestrated nature might prevent it from having as much of a social impact on Peruvians as other large-scale rituals, like a dramatic football match, but it is important nonetheless because of the high stakes involved.

The role of rituals as a ‘social glue’ necessary to the appearance and maintenance of large-scale communities is one of the hypotheses that the Seshat project will enable us to test (for more details on how we will proceed, see Whitehouse et al 2015). As of this summer, we have coded the variables outlined above for hundreds of polities across the world. Hence, we are in a very good position to understand the importance of ritual for the emergence of social complexity.