Nowadays, population growth occupies a central role in the public debate due to its implications on subsistence strategy, environmental change, and its relationship with exogenous factors such as climate variations. A recent report by the UN predicts an average annual rate of global population growth of less than 1% from 2021, which should gradually approach 0.1 % by the end of the 21st century. Of course, modern nations and supra-national organizations need to monitor the population and variation in growth rates in order to take decisions in terms of infrastructure planning, food and water resources management, fiscal policies, etc. This is possible via detailed census of the population that in most countries are carried out every 10 years. Nevertheless, in most countries of the world detailed census as we know it today started taking place only in the second half of the 20th century with the exception of some countries such as the UK, where the modern census was introduced in 1801 following the influence of Malthus after his An Essay on the Principle of Population (1798). Therefore, in the absence of reliable census data for the past, archaeology is the only discipline among the social sciences, which can provide a picture of population dynamics over the longue durée in pre-modern societies. This allows archaeologists to build narratives of population fluctuations and their implications for time spans covering thousands of years and not only the past two centuries. In fact, past studies have emphasized the role of population size in explaining cultural change, variation in subsistence strategies, shifts in sociopolitical complexity, and a host of other critical developments.

How can we reconstruct past population? The first challenge in archaeology is to identify those archaeological materials that might provide the most reliable indirect measures of population (see Drennan 2015 for a good overview). Population estimates build on the assumption that an observable density of archaeological evidence over time and across a study region is somehow proportional to population. Put simply, the bigger the population, the stronger the signal in the archaeological record (e.g. the higher the density of pottery sherds, stone tools, site counts, radiocarbon dates, etc.). Such indicators do not offer good evidence for absolute numbers of people in the past, but rather offer an idea of relative intensities of population and proportional change through time.

In the past decades, the most popular archaeological proxies for modelling demographic trends have been the counts of archaeological sites, the estimated extent of settlements and the summed probability distributions (SPD) of radiocarbon dates. The latter is the result of counting up (summed in the manner of a histogram) the calibrated raw radiocarbon years of each organic sample, which are expressed in form of probability statements with error ranges. The idea is that the more people living in a given region, the more garbage, the more organic materials, and the more radiocarbon collected, and dated.

Nevertheless, these three proxies are rarely compared directly. Thus, in our recent article we advocate the use of a multi-proxy approach as a way forward in archaeological demography in order to have a better and more complete understanding of population dynamics in a given region during a certain chronological time-span. In practical terms, the divergences and convergences among the patterns defined by each archaeological proxy provide powerful insights and a wider range of explanations in describing population fluctuations both in the time span as a whole and in particular sub-periods. The results of our paper shows first a substantial increase of population in central Italy during the Early Neolithic period (ca. 6000/5800 BC) with the introduction of farming, a dramatic peak in the Early Irion Age late second-first millennia BCE) with the onset of proto-urban societies, and a last demographic boom during the Roman Empire (early first millennium CE). These episodes are punctuated by periods of population stagnation and population decrease that could be due to a wide range of factors. Although the results of our research have defined neat patterns of population’s boom and bust for central Italy, well supported by a solid and well-established methodology, it is more difficult detecting the cause behind the drops of population. There are a wide range a possible explanations that are not necessarily mutually exclusive and that may have interplayed with each other: disease, climate change, exceeding the carrying capacity of the land, warfare, etc. 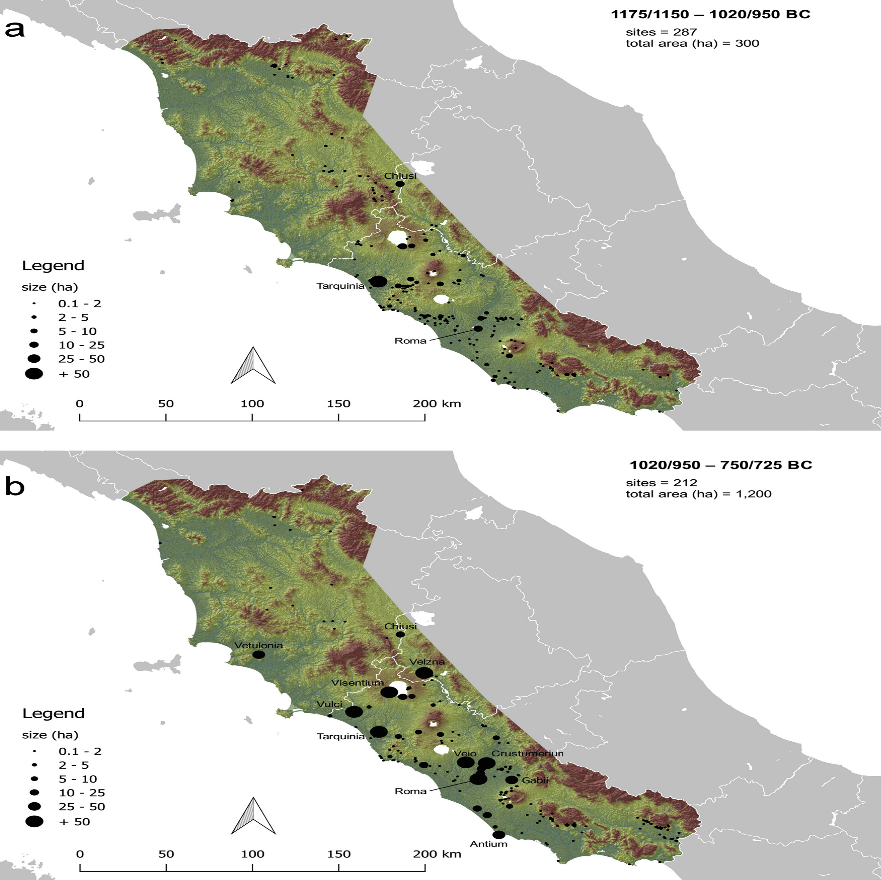 Map of Central Italy showing settlement distribution and estimated size during the Final Bronze Age (a) and the Early Iron Age (b). From: Palmisano et al. 2017. “Comparing archaeological proxies for long-term population patterns: An example from central Italy,” Journal of Archaeological Science 87: 62.

In this case, a multi-disciplinary approach is needed in order to disentangle all possible explanations that archaeology cannot elucidate alone. For this reason, our research is part of the project Changing the Face of the Mediterranean a Plymouth (department of Geography) – UCL (Archaeology) collaboration, which aims to assess role of human land use, population change and climate in population in transforming the environment from nature-dominated to culturally-modified. Furthermore, alongside the core project team we rely on a network of regional experts that provide us with further help in comparing and critically evaluating archaeological and environmental proxies for Holocene demography and landscape change in the wider Mediterranean region.

In this perspective, we share the philosophy of the Seshat project, which brings together different experts from different fields and areas of expertise for testing theories about the political and economic development of human societies in a comparative perspective. In particular, the practice of sharing online datasets and codes to guarantee the reproducibility of data analysis represents a step further to make the scientific community closer and more cooperative.

As archaeologists, we are in the privileged position to make inferences about past social changes in the very long run, and the strength of our findings can have a strong predictive power for explaining the actual and future changes in human societies.