The link between ant agriculture and early social complexity 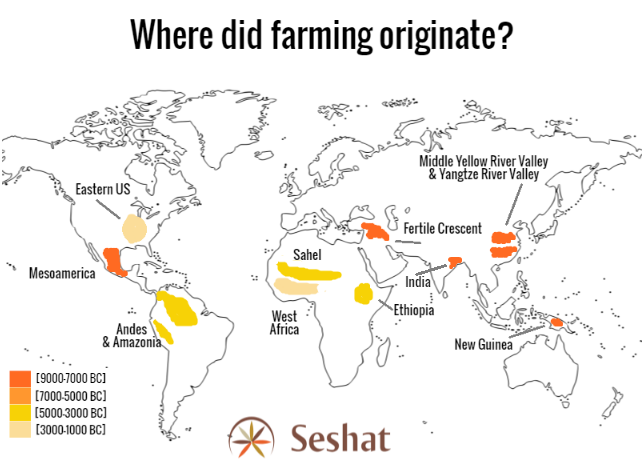 Farming was invented independently by ancient humans at least nine times in different regions throughout the globe. The invention of farming is linked by experts to the evolution of early social complexity. Here is a visualization of the original ancient centers of agriculture production:

Millions of years before the first humans began farming, ants had already mastered their own version.

Leafcutter ants use leaves to farm fungus that they then consume. In many ways, the processes of leafcutter ants resemble human farming. While several types of ants farm fungus, leafcutter ants have some of the most complex societies in nature, with colonies of millions of ants. The farming of fungus allowed leafcutter ants to evolve and maintain huge, complex populations—an interesting analogy for the evolution of human civilization.

Modern diversified human agriculture does not resemble the one-crop subsistence version practiced by ants. However, some researchers believe that the effects of ant agriculture on colony size and complexity could be used to better understand these same dynamics in humans. Seshat editor, Lawrence University professor, and Santa Fe Institute researcher Dr. Peter Peregrine founded the group Convergent Evolution of Agriculture in Insects and Humans in 2014. The academic organization studies the evolution, practices, and social effects of farming.

Dr. Peregrine’s work was recently featured on science website Phys.org. “If you can hit upon an adaptation that’s a really good one, like agriculture, then you’re apparently tremendously successful [as a species],” Dr. Peregrine told the website. Early agricultural areas like China’s Middle Yellow River Valley and the Fertile Crescent in modern-day Iraq soon became the largest, most complex societies in the ancient world.

Dr. Peregrine hopes that studying ant agriculture will lead to important insights on how to improve our farming methods and technology.

Boyd, Melanie. 2014. “The different paths of the Neolithic revolution in Egypt and Sudan.” The Collegiate Journal of Anthropology, 2.