Researchers interested in cultural evolution often highlight the importance of taking cultural diversity seriously. Human cultural systems are quite diverse, they note, but much research suffers from a chronic form of tunnel vision. Without a comprehensive map of cultural diversity, researchers are likely to make false inferences from relatively homogenous sampling pools. We can’t see the forest for the trees. Joe Heinrich and collaborators made this case plain in the context of psychological research when they found that much of our knowledge of human psychology was limited by the fact that scholars relied heavily on the study of WEIRD college students (that is, people who are Western Educated Industrialised Rich Democratic). A broad and representative sampling frame is important. To know where we’re going, we need a good map.

Scholars have been slow to piece together a comprehensive map of cultural diversity, however, because much of the relevant data on cultural systems is dispersed across thousands of individual ethnographies, historiographies and case studies. While detailed accounts of an individual cultural group can give researchers insights into what is particular and unique about that group, researchers interested in making general and reliable statements about the incidence, distribution, and causes of cultural variation need to pull together vast amounts of data cultural systems from around the globe.

This week a team of researchers has announced the creation of what promises to be a powerful new tool for the analysis of cultural diversity. It has the potential to help researchers piece together a map of cultural systems to explore new theories and topics in unprecedented detail. The project team members took to PLOS-ONE to announce their plans. The authors, led by Dr. Kathryn Kirby, postdoctoral fellow in the Departments of Ecology & Evolutionary Biology and Geography at the University of Toronto, put together a large, interdisciplinary team to bring us D-PLACE: the Database of Places, Languages, Culture and Environment. D-PLACE provides a massive, open-access store of information on cultural practices, geography, and environment covering over 1,400 pre-industrial societies. The data in D-PLACE are drawn from two cross-cultural databases: the Ethnographic Atlas and the Binford Hunter-Gatherer Dataset. The attractive new project site can be found here.

While Seshat: Global History Databank collects information on a host of topics concerning historical societies from pre-history to the 19th century, D-PLACE focuses only on information gathered by ethnographers on pre-industrial societies in the 19th and 20th centuries. Seshat includes many variables beyond the scale of cultural studies, including warfare and military technology, ritual practices, population and polity size. The way that cultural norms and practices evolve over time is a key component to many of the theories we are exploring at Seshat, from the rise and decline of large territorial states, to the institutions that underpin economic growth, to the spread of religious systems. D-PLACE provides a new and useful compendium of observations about fairly recent cultural developments; an important complement to the sort of work we are doing.

D-PLACE’s database lets users compare up to four variables for different societies at the same time. Variables are location, environment (for example, average rainfall and temperature), culture (anything from labour practices to economic activities to social structure to games played in the society), and language family. The downloadable results are available in various formats including maps, trees, and tables.

The data can be used on a few different levels. In its simplest form, the database was built as a tool for exploration for everyone from scholars to young students to members of the public. Here is a map search for different types of games played in societies in China: 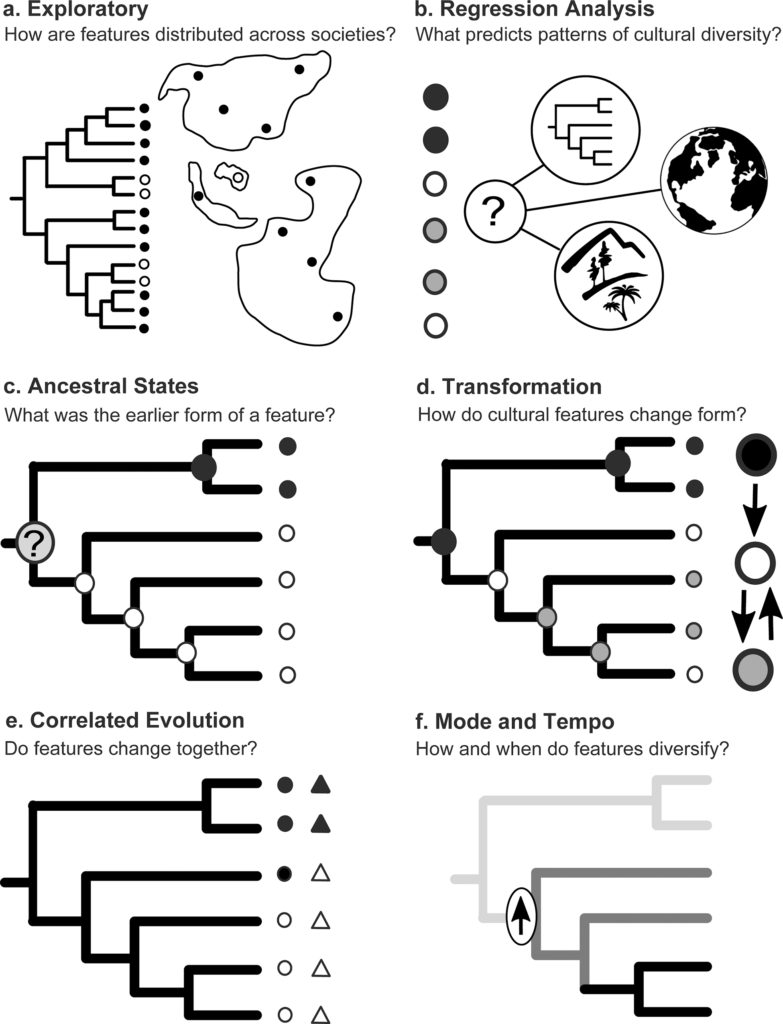 In these ways, D-PLACE offers a useful method for the analyses of cultural studies and human diversity in a specific period in time.

Although limited by its narrow temporal scope and its reliance on only two cross-cultural datasets, this open-source and user-friendly database is likely to grow into an increasingly useful resource for accessing and analyzing information on cultural practices around the globe. The information offered can be utilized by other projects, like Seshat, to create very large, comprehensive historical datasets leading to better, more powerful analyses. Hopefully, we will continue to see D-PLACE and more resources like it continue to grow in the future, opening up opportunities for data-intensive research into cultural diversity.