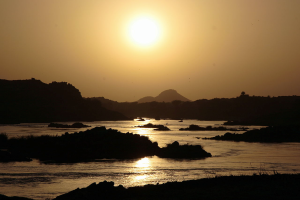 Without a doubt, global climate change is one of the biggest hot-button issues in the world today. The world is getting hotter, led mainly, we are told, by the ever-increasing burning of fossil fuels to power our modern lives. This has already started to affect many facets of our lives in major ways, from growing numbers and severity of droughts, hurricanes, and other severe weather, to crop failures and rising prices of necessary foodstuffs, to mounting tensions and threat of conflict around the world. This is not, of course, news. But what is surprising is that this story may also not be new.

That is what Yale professor of History and Classics and Seshat collaborator Joseph Manning claims. Prof. Manning is a leading expert on the political and economic history of Hellenistic Egypt, covering the time of the Ptolemaic dynasty right after the country was conquered by Alexander the Great and before it was overrun by the Romans, a period of roughly 300 hundred years from 305 to 30 BCE. The Hellenistic period was marked by drastic political, religious, social, and economic change in this rich and important region, but was also marred by nearly constant warfare with other states in the Near East (the Seleucids of Iran, Iraq, and Syria, the Attalids in western Turkey, etc.) as well as several large-scale internal rebellions fomented by unrest and led by the religious elite in the southern part of the country.

Prof. Manning’s new research takes a ground-breaking new look at the topic of warfare and rebellion in Hellenistic Egypt through the lens of ancient climate change. Taking a Cliodynamic approach to the topic, Prof. Manning is gathering data on volcanic activity, crop yields, and temperature fluctuations and pairing this with information from the historical record concerning the rebellions and unrest of the period in order to test the possible causal influence of the climatic factors. Specifically he asks if volcanic eruptions affected the Inter Tropical Convergence Zone (ITCZ), and are responsible for rain in East Africa and in turn, the annual flood of the Nile. A large eruption can perturb the ITCZ and result in less or no rain hitting the Nile basin. This would impact the annual Nile flooding – on which ancient Egyptians were almost entirely dependent for growing the crops needed to feed the population – which in turn fomented the unrest in the South and, therefore, led in a direct line to rebellion.

It is clear how research into the broad effects of climate events in the past is relevant for the modern world; by tracing out this long chain of causality from a volcanic eruption in the Indian Ocean to the near overthrow of a Hellenistic monarch in the eastern Mediterranean, Prof. Manning will shed light on the way that climate change can impact social, political, and military life in the modern world. Hopefully, this will allow us to avoid some of the negative and violent repercussions faced by the Ptolemies!

Prof. Manning will be presenting this research on Tuesday, November 17, 2015 at 12:00pm at the Kline Geology Laboratory, Room 101 in Yale University. The lecture is part of Yale’s new initiative, called “Climates of History,” part of the Yale Climate and Energy Institute of which Prof. Manning is an affiliated faculty member and on the steering committee.