Chiefs Who Eat the Land: Images of Power in Hawai’i before and after Western Contact

The old Hawaiian term for the chief of a district or small island is ali’i ‘ai moku: ‘chief who eats the district’.[1] This had a literal meaning ‒ control over a district came with taxation rights over the crops and livestock of resident commoners ‒ but it also neatly expresses the indigenous conception of the chiefly class (ali’i) as potentially dangerous predators. Old proverbs and traditions almost seem to revel in this chiefly voraciousness.[2] The highest-ranking chiefs were essentially gods, ‘“raging blazes” who walked on earth’,[3] and the appropriate attitude to the ali’i was one of awe. For the commoners, chiefs were sharks walking on land:

A shark going inland is my chief,
A very strong shark able to devour all on land;
A shark of very red gills is the chief,
He has a throat to swallow the island without choking…[4]

In this short blog post I’d like to make a few observations about images of chiefly power and the realities of everyday life for ordinary Hawaiians (maka’āinana), both before and after European contact. I’m no expert on Hawaiian history ‒ this is based on a few things that have cropped up during recent Seshat research ‒ so would welcome your comments below the line. 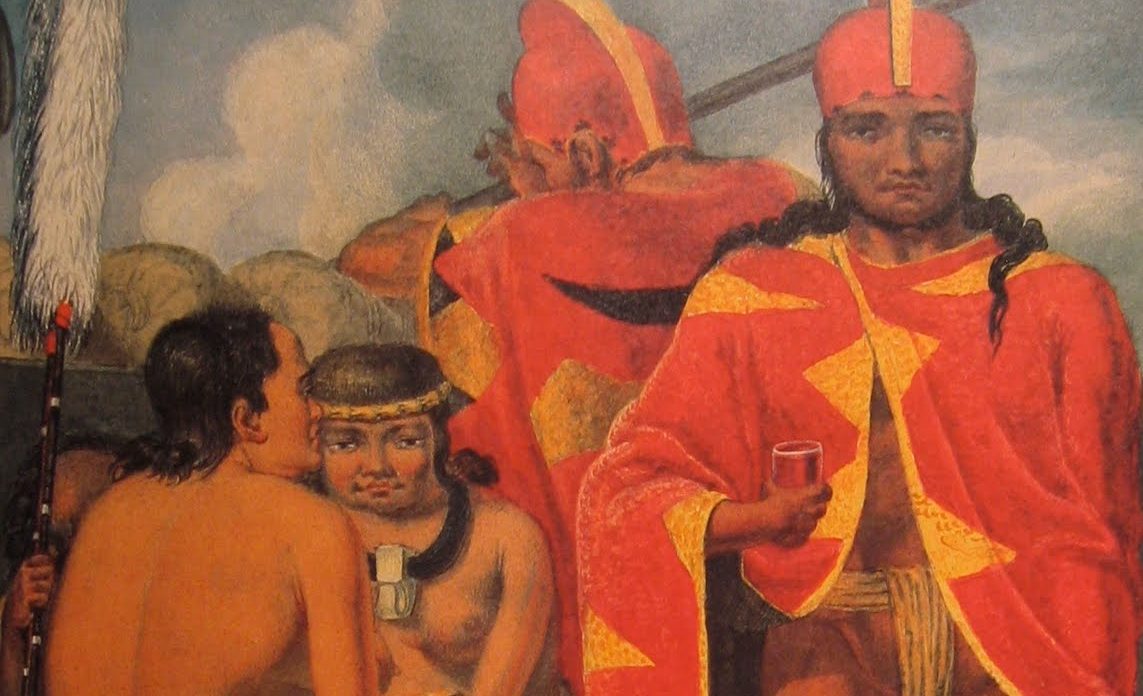 Chiefs of Oahu, Visiting Sloop Kamchatka, 1818, Mikhail Tikhanov. This painting, showing the Hawaiian ali’i Boki and Kahekili Ke’eaumoku II, is by the artist who sailed on the Russian frigate Kamchatka’s circumnavigation of the world in 1817-19. The chiefs wear the ultimate signs of high rank, the feathered cloak (‘ahu’ula) and helmet (mahiole). Public domain. Source.

In keeping with their shark-like reputations, Hawaiian chiefs did indeed appropriate large amounts of food (and other goods) produced by the commoners. The yearly Makahiki festival served as an opportunity for ritualized taxation: the royal court processed around the island, collecting the produce of the land from altars in each district. The goods were piled up in heaps and served as offerings to the god Lono as well as revenue for the chiefs.[5] If the offering was judged too meagre, ali’i in the procession could order the district to be plundered ‘in the name of the god’ until they were satisfied with the tribute.[6]With a few exceptions, feasting ‒ an integral part of social life for commoners and chiefs alike in many other Polynesian island groups ‒ had become restricted to the elites by the time of European contact. According to archaeologist of Hawai’i Patrick Kirch, they could be found feasting on luxury foods like pork, large pelagic fish, and dogs fattened on taro paste almost ‘every day of their lives’.[7]

Despite all this, certain features of precontact Hawaiian society prevented commoners’ living conditions becoming pushed below subsistence levels. For instance:

The effect of all this was that even after the local chiefs had ‘eaten the district’, the average maka’āinana was well-nourished and had time for leisure activities like surfing, which was practised by chiefs and commoners alike.[13] 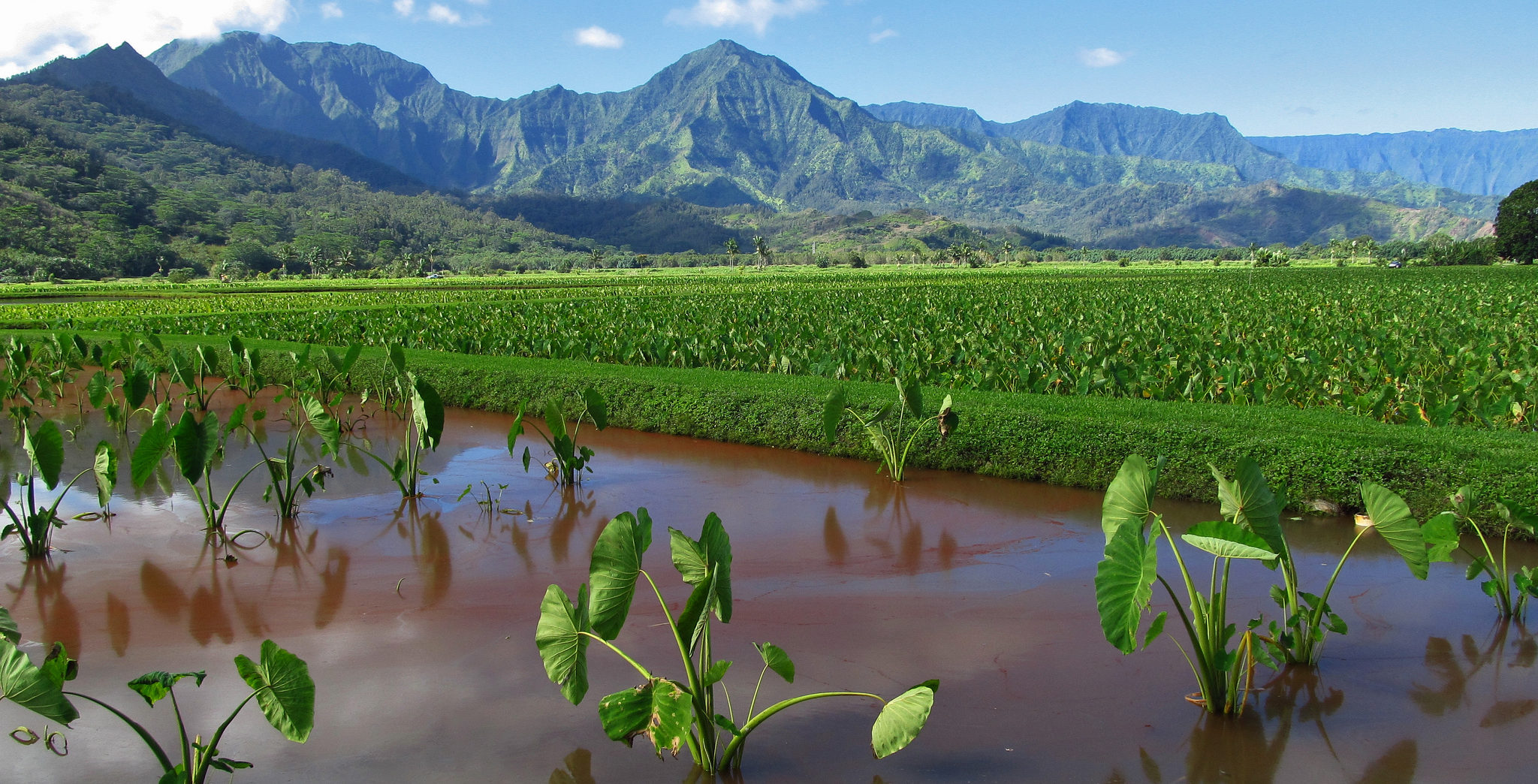 So how did all this change after the fleet of Captain Cook’s third voyage ‘pierced the veil of isolation’[14] separating Hawai’i from the wider world in 1778, making way for a range of Western visitors (traders, explorers, and eventually missionaries) to the islands? Initially, indigenous class relations, systems of land tenure and taxation remained largely intact. However, the population plummeted due to introduced diseases,[15] and the insertion of Hawai’i into the global economy changed the focus of domestic production. For instance, from 1805 onwards, labour was diverted away from food production and into the collection of sandalwood for trade with the British and Americans.[16]

Into this situation came the first missionaries ‒ predominantly American Calvinist Christians ‒ in 1820, aiming to convert Hawaiians not only to Christianity but to an entirely new moral ‘package’ that valued chastity and monogamy, hard work, democracy and individual rights.[17] The old Hawaiian images of shark-like, fearsome chiefs found new echoes in these missionaries’ critique of native rule. Chiefs were condemned as arbitrary and despotic: New England-born missionary Levi Chamberlain lamented the ‘dark minds and depraved hearts of despots who hold the common people in the most absolute subjection’.[18]

The key difference was that now, these images of chiefly power were used to push for the replacement of the traditional system of customary land rights with private property laws and contract labour.[19] Missionary families and business interests in the islands soon became entangled, and the Calvinist work ethic suffuses the writings of early entrepreneurs like the Bostonian William Hooper. In 1835, he began work on the first commercially viable sugar plantation in the islands, the Koloa Plantation on Kauai.[20] Hooper viewed himself as something of a saviour: the plantation system, he wrote, would eventually emancipate the natives from the miserable system of ‘chief labour’ which ever has existed at these Islands, and which if not broken up, will be an eventual preventitive to the progress of civilization, industry and national prosperity.[21] 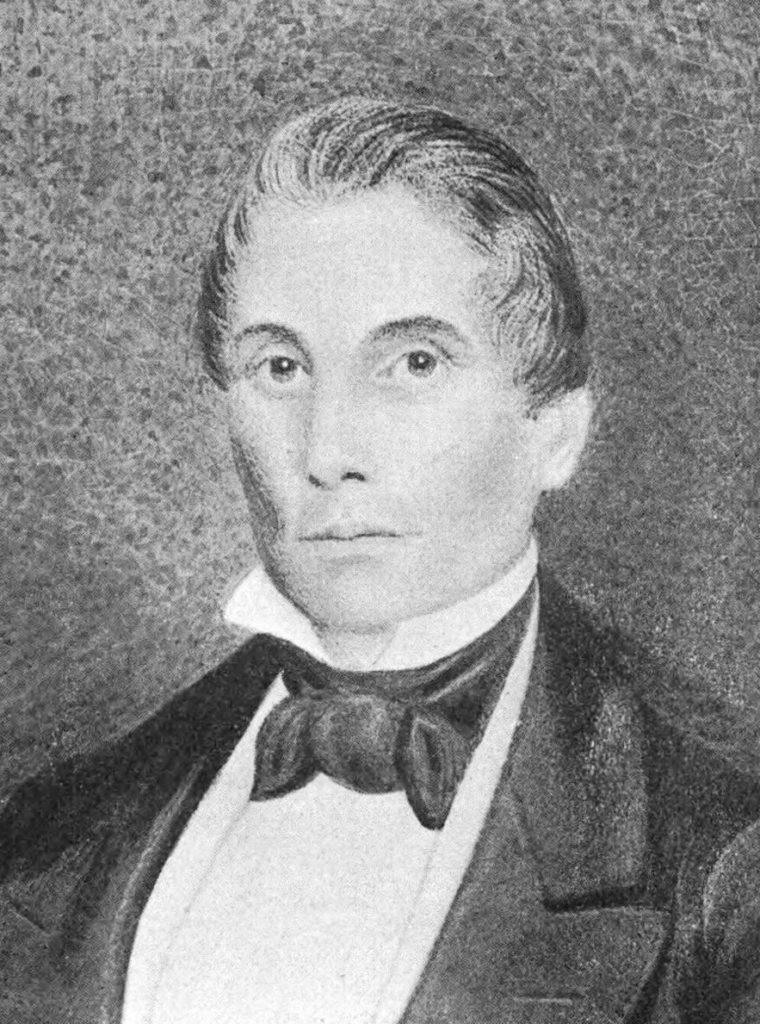 Levi Chamberlain, an early American missionary to Hawai’i. This portrait by an unknown artist dates from 1845. Public domain. Source.

Although many ordinary Hawaiians converted to Christianity after the mid-1820s and enthusiastically adopted reading and writing, this aspect of the new moral and economic system was harder to accept. The maka’āinana had been used to working in family groups to produce enough food for themselves and their chiefly ‘landlords’ (as well as some additional corvée labour in the chief’s fields and on building projects). Working on sugarcane plantations for foreign masters ‒ ten- to twelve-hour shifts of hard labour for meagre pay, sometimes in the form of coupons that could only be spent at the plantation owner’s store ‒ is vanishingly unlikely to have felt like ‘emancipation’ or ‘prosperity’ for the average worker.[22]

Perhaps even more importantly, the resistance of Hawaiians to this form of work caused frustrated missionaries and planters to complain, in morally charged terms, that the natives were inherently indolent and pleasure-seeking. Though it might seem strange to hold that indigenous Hawaiians were simultaneously in need of salvation from oppressive, greedy chiefs and too concerned with merrymaking, sex and dancing, the ‘myth of the lazy native’ was a useful justification for the introduction of coercive new labour laws.[23] Under the Masters and Servants Act of 1850, indentured labour was legalized for Hawaiians and immigrant labourers. Absentee workers could be arrested and imprisoned or sentenced to work for their employers for an extended period. ‘Up until as late as 1874, Kanaka Maoli [indigenous Hawaiians] were still being prosecuted for haalele hana, abandoning work’.[24]

Thus, while in precontact Hawai’i, shark-like chiefs ‘ate the land’ in a very real sense, the economic system that developed decades after Captain Cook’s arrival in 1778 meant decreasing living standards and harsher labour conditions for the bulk of the population. The replacement of older systems of communal farming by contract labour made the time-honoured response to arbitrary or oppressive behaviour by those in power ‒ namely, to seek more favourable conditions elsewhere ‒ into a crime. In short, some of the social mechanisms that had kept ordinary Hawaiian living standards above a certain level dissolved.

What this suggests to me is that we must be very careful to separate representations of power from political and economic realities. Old Hawaiian chiefs and kings had fearsome, voracious reputations, but their ability to appropriate food and wealth was counterbalanced by commoners’ freedom of movement, the threat of an uprising, and the high yields of Hawaiian food crops. Conversely, the imported, Calvinist-inflected morality framed coercive practices in labour mobilization as a necessary evil in order to morally improve ‘indolent’ Hawaiians, or even as a form of emancipation from the despotic power of chiefs.

Seshat’s methodology takes into account both ideologies of power (asking, for instance, whether kings or high chiefs were viewed as gods on earth) and its more concrete manifestations (like degree of taxation, differential access to the legal system, and social mobility). It’s been fascinating for me to work on Hawai’i from initial Polynesian settlement about 1000 years ago to the immediate post-contact era, using our coding system to capture social, political and economic change. I look forward to seeing what Seshat’s comparative analyses make of Hawai’i’s shark chiefs and maka’āinana taro farmers!

[2] Peter Turchin, Seshat’s Founding Editor and Overall Coordinator, has spotted a similar pattern in other areas of the world: ‘in ancient India, the king (raja) was called “the devourer of peasants” (vishamatta)’. See Peter Turchin. 2016. Ultrasociety: How 10,000 Years of War Made Humans the Greatest Cooperators on Earth. Chaplin, CT: Beresta Books, chapter 7.

[4] This chant, ‘Fallen Is the Chief’, celebrates the victories of the first king to unify the entire Hawaiian archipelago, Kamehameha I. Quoted in Marshall Sahlins. 1992. Anahulu: The Anthropology of History in the Kingdom of Hawaii, Vol. 1. Historical Ethnography. Chicago: University of Chicago Press, p. 22.

[15] La Croix and Roumasset, ‘The Evolution of Private Property in Nineteenth-Century Hawaii’, p. 834.

[23] Noenoe K. Silva. 2000. ‘He Kānāwai E Ho’opau I Na Hula Kuolo Hawai’i: The Political Economy of Banning the Hula’. The Hawaiian Journal of History 34: 29-48. The ‘lazy native’ phrase comes from Malaysian sociologist S. H. Alatas’ history of 16th- to 20th-century Southeast Asia: Syed Hussein Alatas. 1977. The Myth of the Lazy Native: A Study of the Image of Malays, Filipinos and Javanese from the 16th to the 20th Century and Its Function in the Ideology of Colonial Capitalism. London: Frank Cass, p. 2.