Calculating crop yields and carrying capacity in the ancient world

Since the inception of the project, Seshat research assistants have been collecting data relating to agricultural practices in the past. As with all aspects of the Seshat codebook, the intention is that the data collected will be used to understand broader social organization in the past. The scale of a society, in terms of the number of people who can be supported, is integral to social complexity. Agricultural data allows us to model crop productivity (and by extension population) in the past. We have now produced our first estimates of ancient crop yields and carrying capacity using the agricultural data from the Seshat Databank.

Existing climate-based models can be very useful for predicting the carrying capacity in the past.  However, agricultural management practices are known to increase yields substantially, and such practices are not factored into environmentally-derived models. Currie et al (2015) outlined a method for incorporating archaeological and historical data into crop yield models, which can be used to predict ancient carrying capacity. We have now produced a working version of this method, and have produced estimates of crop yields for the thirty regions covered by Seshat, from the first appearance of farming in each region up to 2000 CE. We have incorporated data from Oyebamiji et al’s (2015) crop yield model for the past 10,000 years, and modified this data using our knowledge about past agricultural practices from the Seshat Databank, through the application of our knowledge of how particular agricultural practices improve crop yields, as evidenced through the general agricultural sciences literature.

The Oaxaca Valley, Mexico is one of the regions of interest to the Seshat project.  It has a long history of agricultural activity, with the first evidence for the cultivation of squash dating to between 1000 and 8000 cal BCE at Guila Naquitz cave. The Oaxaca Valley is particularly interesting as a case study due to the ‘three sisters’ polyculture system that is practiced throughout the Americas. Maize, beans, and squash, are cultivated in a polyculture system which raises the overall number of calories produced from these crops. Given the archaeological evidence currently available, it seems that all three crops were domesticated in Mexico by 2300 cal BCE, raising the likelihood that the three sisters system was in place by this date.  In terms of the estimation of carrying capacity we therefore expect an increase in carrying capacity after this date. Other significant agricultural developments in the Oaxaca Valley include the development of irrigation technology between 1000 and 500 BCE, and the development of terracing around 300 BCE. Spatial variation in maize yields, 2300 BCE, Oaxaca Valley.  We were able to make our models spatially explicit through the use of data relating to the current productivity of land patches in the Oaxaca Valley, obtained from the UN FAO GAEZ.  Crop yield data from Oyebamiji et al (2015) is also spatial in nature.

The Kansai region of Japan is another region of interest for ancient crop management practices.  Rice farming arrives around 300 BCE, imported from Korea in an already highly developed form, with irrigation and terracing practiced from the outset. However, the introduction of large livestock to the archipelago around 700 CE naturally provides agriculturalists with good manure, raising yields further.  A crop rotation system, whereby irrigated fields are drained and barley sown, is introduced around 1150 CE and creates a system where every patch of land produces an annual yield of both rice and barley – likely to raise carrying capacity further. 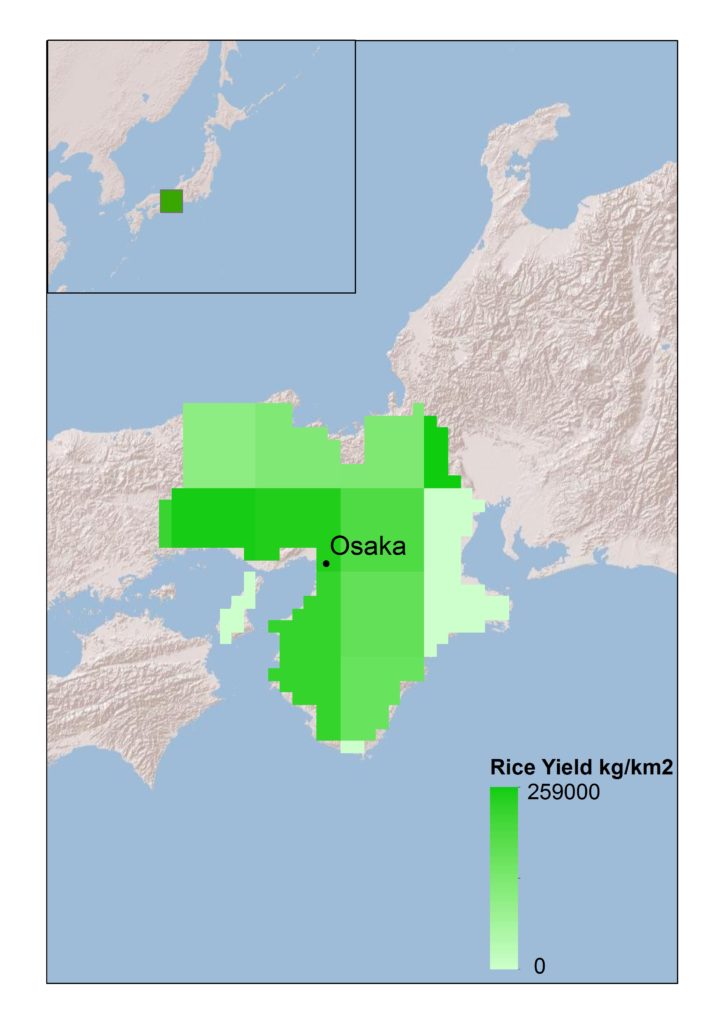 Through combining the agricultural data from the Seshat Databank with climate-based crop models, spatial geographic data and data on modern agricultural practices, we are able to create informed and realistic models of obtainable crop yields in the past. The scale of a society, and its ability to create a food surplus is an essential pre-requisite to social complexity. Understanding the scale of a population that can be supported is integral to understanding other aspects of social complexity. Could a surplus be produced?  Could the state support specialist craftsmen, ritual leaders, or warriors? And was there any incentive to colonize neighbouring regions? Modelling agricultural productivity can give historians and archaeologists an insight into these questions.