The main gate of Tokyo University, photo by the author

On the 18th of April, Prof. Harvey Whitehouse and Dr. Pieter Francois, two out of three of the Seshat: Global History Databank founders, rendezvoused with Dr. Patrick Savage (a postdoctoral researcher working on Seshat) and myself (research assistant) at the prestigious University of Tokyo. However, this meeting was not to gather data or collect information for the coding of Japan-related entries in the databank, but rather to present some preliminary data on ‘Big Gods’ to academics of the Institute for Advanced Studies on Asia. This institute is home to some of Japan’s leading experts working on several different areas of religion in the world, with expertise ranging from Medieval Islamic Iran to Buddhism and Hinduism in South Asia and the Indian subcontinent.

Upon arrival, we were greeted warmly, with snacks and drinks prepared for us. The workshop then began with Dr. Savage’s presentation. After a general introduction of Seshat and the coding process, the key point was asked to the experts: ‘When was the earliest example of a threat of punishment given by supernatural beings?’ Based on preliminary data, a graph was shown that heavily indicated that these punishment-giving ‘Big Gods’ only started to appear in societies after having reached a certain level of complexity; that is to say, social complexity is causative of these moralising gods being accepted into human societies. The rationale for this is debatable, but it could be thought that, when societies become larger and more complex, a mechanism is required to defend against those who wrong or hurt others in a society that has become so large that moral policing can no longer be conducted effectively at a community level and there is a need for an intervening god to do this policing for them. A general discussion ensued, probing further into Seshat’s methodology, coding process, and indeed closer examination of the empirical data on the appearance of these ‘Big Gods’ worldwide. Although there were certain questions raised and disagreements on epistemological grounds, Prof. Crispin Bates of Edinburgh University summarised the debate well: ‘The conclusion, about social complexity being causative of moralising “big gods” is very controversial, especially in the view of most major faiths! However, I find it very persuasive.’ 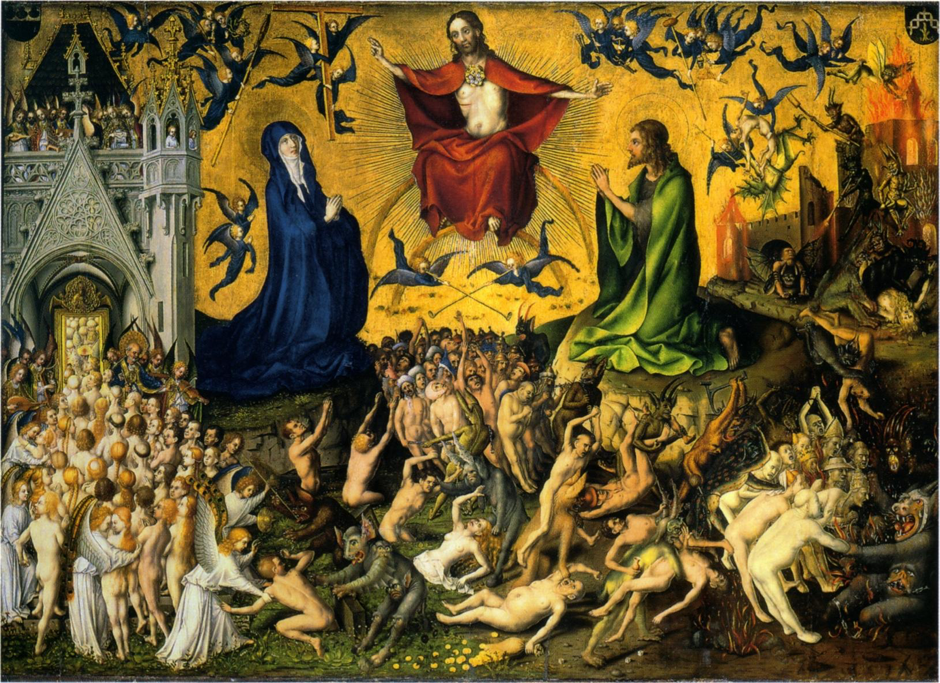 The Last Judgment, painted by Stefan Lochner in the 15th century, depicting a ‘Big God’ who judges and punishes humanity based on their moral actions

Some concerns were raised by Japanese scholars about how coding certain concepts of morality in English only, fairness or bravery for instance, may translate into the non-Western scholarly and cultural traditions. Indeed, this and the concern of whether context-bound phenomena can be accurately coded in a database were raised, too. This kind of response seems very valid in its care for the details and specificities unique to a particular culture, and has long been discussed by Prof. Peter Turchin, another founder of Seshat, and was mentioned again by him in the most recent post of this blog.[1] The whole point of Seshat is to move away from the micro level, to a macro level – that is to say, away from the context-bound (while making room for variation) to attempt the construction of a databank that can identify larger trends in human civilisation on a global level, while also taking great care to take note of expert opinion and base these data on both ethnographic records and of course historical sources and recent cutting-edge research. It certainly sparked an interest in Tokyo, and yet again Prof. Bates was spot on in his closing statement:

Some may regard this as unfashionable, but cultural relativism has had its turn now. I think people are moving back and thinking of new ways in which we can attempt to generalise globally. To understand globalisation in the 21st century, we have to have bigger theories, we have to do comparisons. In the era of Nationalism in the 19th and 20th centuries, it was fashionable to do histories of individual countries and that just no longer works when we are talking about the world we are living in. It just does not explain how we got to where we are.

This debate in Tokyo is not only relevant to the dialectics of positivism and relativism, the macro and micro, the national and global, etc., but also something very contemporary. In this age of post-truth politics, where rhetoric and cherry picked facts are used to win favour with the electorate, it is very timely that, in this climate Prof. Whitehouse is undertaking this project to get around the problem of building conjecture based on cherry-picked examples, merely to support one’s own pre-decided argument. Seshat: Global History Databank  is certainly a step towards solving such an issue and even preliminary data such as those on ‘Big Gods’ already provided some interesting hypotheses for experts to further discuss. Using binary codes, certain questions (such as ‘did moralising gods exist in x polity at y time?) can be answered on a global scale with ‘absent’ or ‘present’ (‘unknown’ is also an acceptable code); identifying the larger trends with a sense of objectivity, without a pre-decided hypothesis full of cherry-picked examples, is certainly one of the functions Seshat could be used for.

I am reminded of the writings of one of the greatest minds of Western civilisation: Gottfried Wilhelm Leibniz. Perhaps it is no coincidence that the binary system he invented in his article of 1679, Explication de l’Arithmétique Binaire, formed the basis of modern computer binary systems, and thus the computer coding language behind the binary codes being used in Seshat to decide the presence or absence of certain attributes. Leibniz’s global outlook has attracted a recent renewal in the interest of his writings, which was in some part spurred on by Deleuze’s own interpretations of his philosophy in The Fold.[2] It seems to me that there is something very contemporary about Leibniz’s vision of gathering digital information from verbal/written information to later be changed into measurable data; he also planned to do so with his own calculating machine, and it seems Prof. Turchin’s methods for Seshat are similar indeed:

We take mathematical models and we ran them forward and we extract quantitative predictions about them about some aspect of history. We do it for rival theories and then we see where the predictions from rival theories disagree. This is the place we need to look to be able to determine which of the theories is better and which is worse. So, to recap. The process involves two steps. In the first step we translate verbal theories into mathematical models, then we extract predictions from the models and in the second step we test these predictions with rich data sets like Seshat: The Global History Databank.[3]

Prof. Turchin continues that, through this process, we should see a ‘cemetery of bad theories’ through demonstrable empirical data. It may just be that our preliminary finding – that ‘Big Gods’ are a consequence of social complexity – could put several theories to rest. This is what was proposed in Tokyo, and even though the data is preliminary and open to improvement by specialists of each particular polity, it is certain that at least half of those who listened were keen to contribute as experts, while the other half agreed to be contacted by email and are keenly awaiting further comparative data based results. Even at this early stage, the debates that took place did make me feel that we are taking great steps towards implementing Leibniz’s own vision of a machine that can solve verbal disputes with coded data. In his own words:

The only way to rectify our reasonings is to make them as tangible as those of the Mathematicians, so that we can find our error at a glance, and when there are disputes among persons, we can simply say: Let us calculate, without further ado, to see who is right.[4]