How did our ancestors respond to climate change?

In a previous blog from 2015, I highlighted intriguing preliminary results from a research project by Yale professor of History and Classics and Seshat collaborator Joseph Manning concerning the impact of volcanic eruptions on social instability in ancient Egypt. Since then, I’ve noticed an increase in such studies looking to uncover how societies in the past have been affected by, and responded to, various sorts of environmental and climatological change. Two years later, I wanted to revisit the topic and discuss the significance of two recent articles: a Nature: Communications article by Prof. Manning and colleagues presenting results from their project; and an article forthcoming in Quaternary Science Reviews detailing how the end of the last Ice Age over 14,000 years ago impacted burgeoning societies in different parts of the eastern Mediterranean.

The Nature: Communications article on volcanic eruptions and Egyptian history is written by Joseph G. Manning, Francis Ludlow, Alexander R. Stine, William R. Boos, Michael Sigl, and Jennifer R. Marlon and is titled “Volcanic suppression of Nile summer flooding triggers revolt and constrains interstate conflict in ancient Egypt.” The authors combine different sorts of evidence that has rarely been joined together in historical work: they first use a series of historical climate data and modeling techniques to trace the impact that volcanic eruptions have on flood levels in the Nile River; they then combine this with historical evidence concerning social unrest within Ptolemaic Egypt, a large but volatile ancient state lasting from 305-30 BCE. Nile floods are significant because, throughout most of its history, Egyptians depended on sizeable flooding from the great river to irrigate farmland and grow the crops the population needed to survive. By putting these two strands of evidence side-by-side, the research team found two significant patterns (Figure 2): (1) that volcanic eruptions significantly reduced the size of Nile floods in subsequent years and (2) that civil strife and revolt within Ptolemaic Egypt was also significantly more likely to occur following these low-flood years than other times. 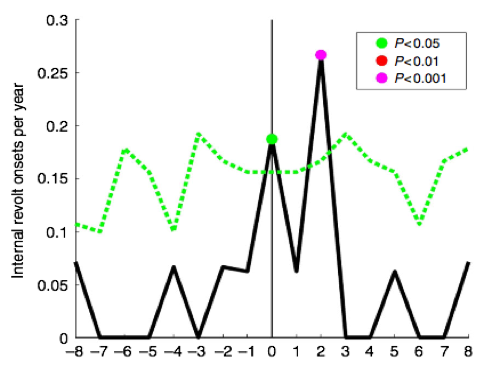 This result is, firstly, a major advance in our understanding of Ptolemaic history, as the Nile flooding and environmental events like volcanic eruptions have not previously been considered as key factors in explaining internal revolts. But there is a broader significance to this work as well. As the authors note when discussing their results, “care must be taken to avoid engaging in and propagating a recently resurgent environmental determinism when interpreting or assigning causality…to associations observed between environmental [e.g. volcanic eruptions] and societal [e.g. internal revolts] phenomena” (p.6). In other words, the argument is not that volcanic eruptions cause revolts. Rather, the causal link is more complex: rising populations and an influx of Greek and Macedonian settlers coupled with fiscal pressures due to repeated warfare with other states in the Middle East as well as lingering tensions between the Ptolemaic ruling elite and the wealthy, prominent priestly class brought Egypt to the tipping-point during much of the third century BCE. In good years, there was just enough to keep these pressures at bay. But the random, unpredictable eruption of volcanoes thousands of miles away led to reduced precipitation in the Ethiopian Mountains, which in turn caused the Egyptian portion of the Nile downstream to flood less than during the typical year, which meant that Egypt’s agricultural productivity was diminished, which led to food shortages, unrest, and, strife. Ultimately, the pressure during these ‘bad years’ was enough to lead to open, sometimes violent revolt. Other periods in Egypt’s history also saw years of bad flooding—during the Roman Empire for instance, or in the Medieval period when the country was under Islamic rule—but this did not always result in internal revolt. To reach this outcome, the volcanic eruption had to be coupled with lingering, structural pressures in Egypt’s social fabric that had been building for years. 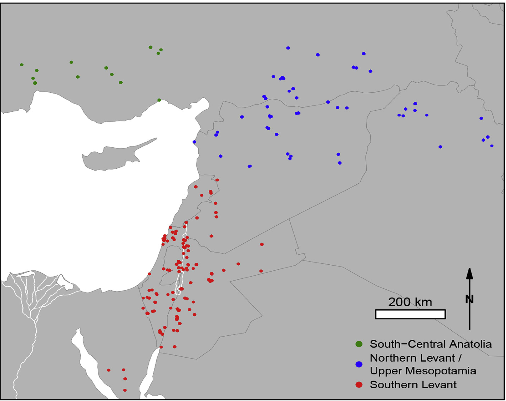 A similar message of complexity comes out of the Quaternary Science Reviews piece, “Human responses and non-responses to climatic variations during the last Glacial-Interglacial transition in the eastern Mediterranean.” Here, authors Neil Roberts, Jessie Woodbridge, Andrew Bevan, Alessio Palmisano, Stephen Shennan, and Eleni Asouti combine information about temperature and precipitation changes between the last Ice Age (roughly 16,000 years ago) and the Holocene (roughly 9,000 years ago) together with evidence for settlement by humans in different parts of the eastern Mediterranean. It is well established that at the end of the glacial period, this region experienced a general climate change towards wetter/warmer weather patterns, though with a ‘cold-spell’ known as the Younger Dryas period (about 13,000-12,000 years ago) where colder/dryer conditions returned. What this innovative paper shows is that, in fact, the impact of these weather changes varied significantly by region and depended, in part, on the longer-run dynamics that had been prevailing in different areas. In some areas, like the Levant (modern Israel-Palestine, Syria, Lebanon) and Mesopotamia (Iraq and Iran), the cold-spell of the Younger Dryas led to increased settlement and, perhaps, hastened the advent of sedentary agriculture as a subsistence strategy, over the hunter-gatherer strategy that prevailed in earlier periods. Conversely, in less advantaged areas like central Anatolia (Turkey), the cold/dry conditions halted population growth and settlement. Again, a key takeaway of this research is how varied human responses are to changing climatic conditions. 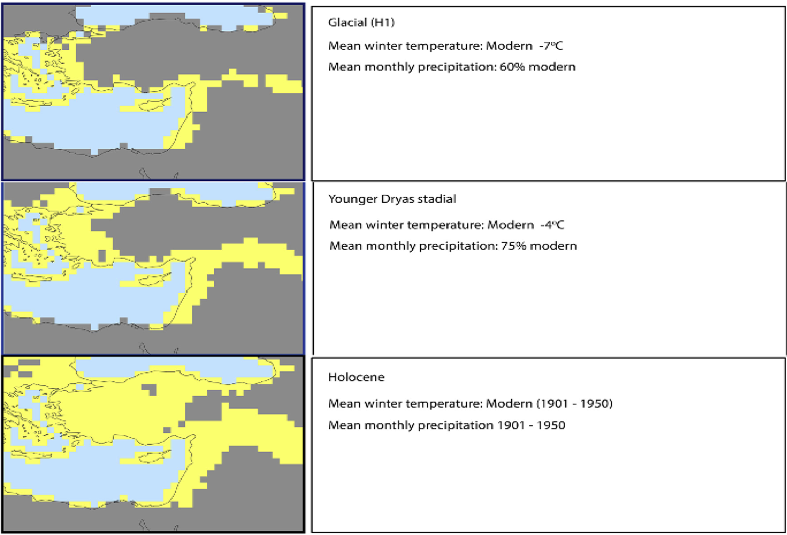 It’s probably fairly obvious why studying climate change and its impact on past societies is important and is increasingly occupying the attention of leading scholars in a variety of disciplines[1]; the current preoccupation—or, better, concern—over the potential impacts of climate change in the modern world naturally lead the historically-minded to question what lessons can be learned from similar events in the past. What is perhaps less anticipated is how complicated the answer seems to be. Typically, we see in popular media rather alarmist headlines tracing a very direct and clear line from climate change to disaster. We are inundated with headlines like “Climate trauma: The invisible cost of climate change“, “Climate change is a threat to rich and poor alike“, or “The Uninhabitable Earth Famine, economic collapse, a sun that cooks us: What climate change could wreak — sooner than you think.” Work such as the papers mentioned here are offering exciting, important windows into how human societies interact with an ever-changing and unpredictable—and potentially hostile—environment. Looking to the past, we can see the different ways that societies have been affected by climate events, but also how we can respond and adapt to new circumstances.

I don’t want to suggest that climate change is not a huge problem that requires immediate, coordinated, and serious international engagement to tackle. What I am saying is that the lesson history seems to want to teach us is that environmental change is not a one-size-fits-all disaster—it’s impact depends on a host of factors, including the size, scope, and pace of change as well as the long-term structural dynamics of the societies effected, including regional differences. Something to keep in mind as we, as a species, grapple with the unavoidable and increasing impact of climate change.

[1] Other notable recent work looking to uncover human-environment interaction in the past includes work by Seshat collaborators Peter Peregrine and Carol Ember, who are involved in a large project seeking to detail the consequences of climate-related disasters on societies in the past as well as the conditions that lead to more or less adaptive responses to such events (see the project site here). See also two recent articles by Prof. Peregrine exploring how different social-institutional structures determine how societies respond to climate-related disasters (this recent article in Disaster Prevention and Management as well as this working paper). An interesting and accessible account of the impact of climate change throughout human history is Brooke, J. L. Climate Change and the Course of Global History: A Rough Journey (Cambridge University Press, 2014).